I recently acquired a whole load of obsolete electronics, when a bag of electronic waste was fly-tipped in my garden!

As I prefer re-use to recycling, I rescued what I could, before passing the rest on to the council for proper recycling.  I rescued some PSUs, a generic Android netbook, a 1TB hard drive (from a faulty hard disk recorder), and an Asus EeePC 1001P netbook: 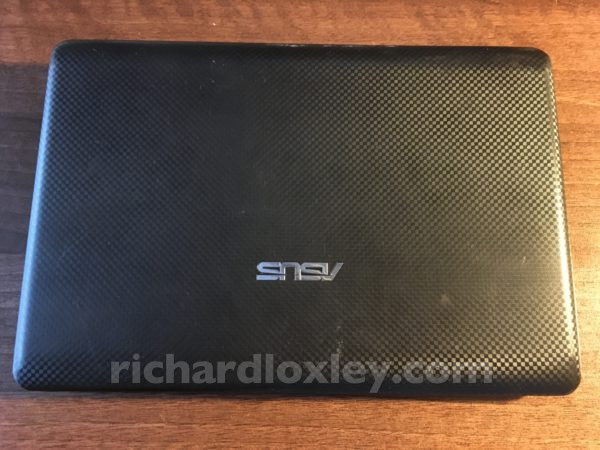 I already have an EeePC (the 1000H) which I love, and still occasionally use when I need a Windows installation (I’m now a Mac user).

But this had no PSU, and it requires 19V/2A, rather than the 12V of the 1000H.  So I rigged up 19V from my bench power supply, and it indeed turned on.  I’ve since cannibalised an old Dell 19V laptop PSU as a more permanent solution.  Like my 1000H, the battery is dead, so it will only work off mains. 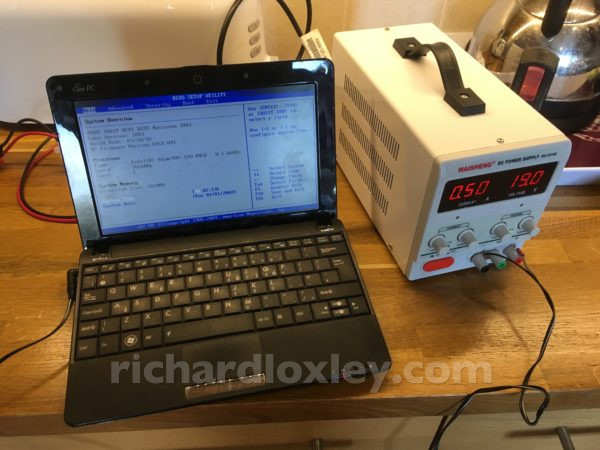 This 1001P originally had Windows XP Home (licence sticker on the bottom) but had been upgraded to Windows 7 Professional. It was password protected, but I managed to reset the Administrator password.  But then it still wanted to connect to a domain controller, and I couldn’t find a way to deactivate that.  I then tried to revert to a system restore point (hopefully before it was connected to the domain controller) but that managed to kill the installation completely.

Oh well, let’s re-install Windows XP.  Sadly the Asus F9 recovery partition must have been wiped when Windows 7 was installed, so that didn’t work.

I then tried to restore from the XP recovery image on the DVD that came with my 1000H (using a USB DVD drive), which appeared to install ok, but then crashed whenever I tried to boot.

Next I installed from scratch using a Windows XP Home SP2 OEM install disk I had from another computer.  The installer blue-screened with the error 0x0000007B. 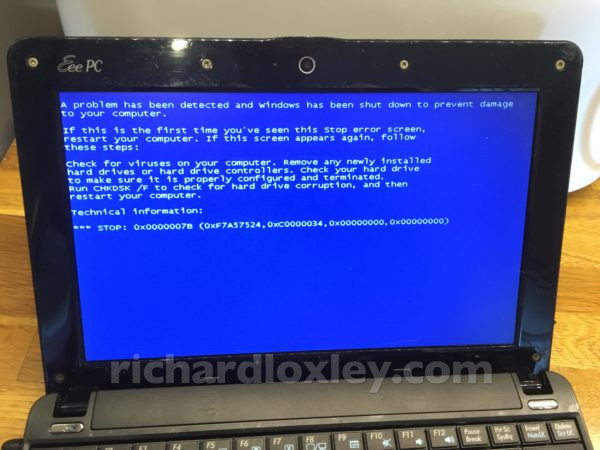 Many internet searches later told me that was because the installer didn’t have the SATA AHCI drivers to access my hard disk.  And XP cannot load the drivers from anything other than a floppy (which the EeePC doesn’t have) or the installer boot image.  It is possible to extract the XP boot disk image, insert the drivers, and re-burn the image, but that sounded like hard work, and all the tools were Windows-only, and I have a Mac. 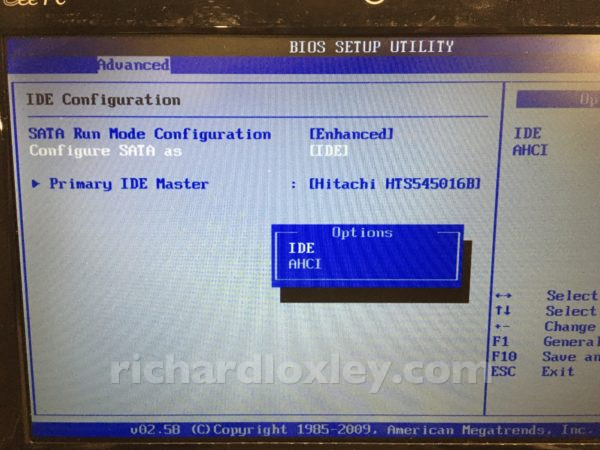 Windows XP will then install.

Next problem, after installation, it required immediate activation of Windows before logging in. But internet activation failed, and telephone activation said to read out an Install ID, but the Install ID was blank!

I found references to this, and apparently Service Pack 3 will fix this problem, so I downloaded the XP SP3 installer and put it on a USB hard disk (formatted as Master Boot Record / FAT32 so it’s accessible from XP).  Then I booted XP into Safe Mode and ran the installer.  It warned that it shouldn’t be installed in Safe Mode unless Windows was broken and it was the only option. I carried on, and it seemed to work.

After a restart, the Install ID was now visible, but internet activation still didn’t work.  I tried telephone activation, but while on the phone the voice menus kept asking about Windows 10 activation, so it wasn’t clear if I could actually activate XP as it’s end of life.  After waiting several minutes on hold with no answer, I gave up.

It seems Windows XP activation has long been cracked.  Since Microsoft seem to have broken XP activation, and my copy is legal (I have a licence sticker, and I’m re-installing on the same device), I have no moral qualms with bypassing the activation.

[Edit, the following seemed to work, but after 30 days it fails.  It says you need to activate Windows, but when you try it says it’s already activated.   It seems other people have the same problem, and this method does not work.  I’ve left it here as a record of what I tried.]

This is how I did it: 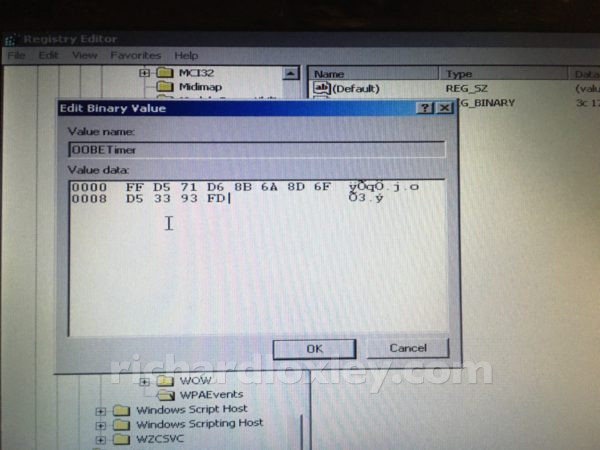 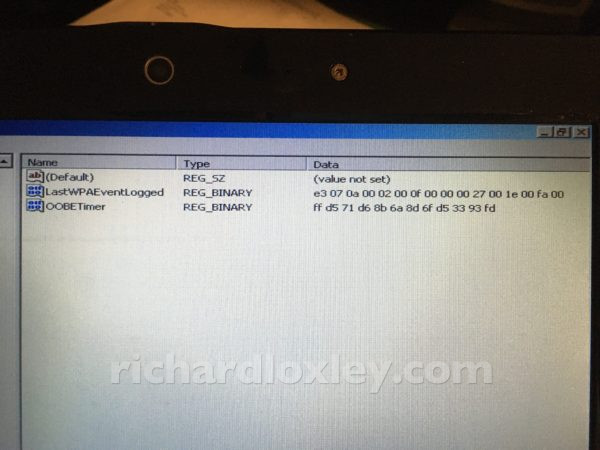 So after 30 days, I then tried the following:

Next I installed all the Asus drivers.  As of 2019 they are still all available, but who knows for how long?  I’ve saved copies just in case.

Here are a few notes about the drivers:

I then installed all the Windows XP updates online, which took quite a while!

Lastly I re-configured the hard drive to be SATA.  This sounds scary from all the information online, it seems it’s strongly discouraged to change the driver of the live boot disk, but it worked ok for me.  General instructions here, this is a summary of how I did it: 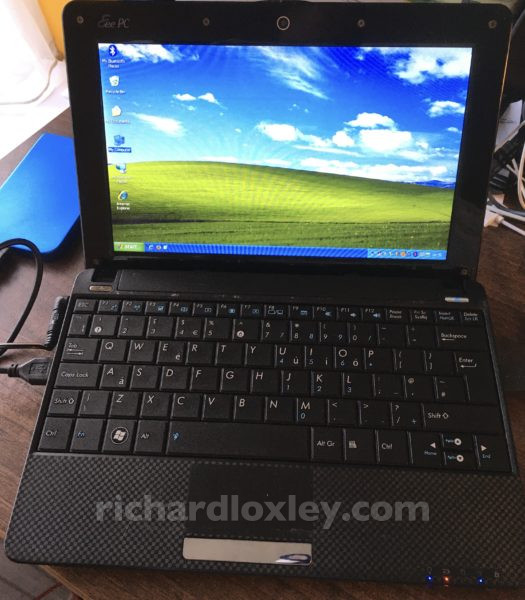 I hope this helps someone else get their EeePC working again!