I’ve been trying to make a decent home-made oat milk for months.  I use oat milk to add to tea and coffee, not for cereal or to drink directly.

I’ve tried so many recipes, and every time I get a really unpleasant “sludge” in the bottom of my drink.  It varies how much I got, but sometimes as much as the whole bottom half of the drink.

I’ve finally managed to find a method that eliminates this sludge, so I thought I’d better document it!

I start with 1.5 mugs of rolled oats.  I don’t soak them in advance. 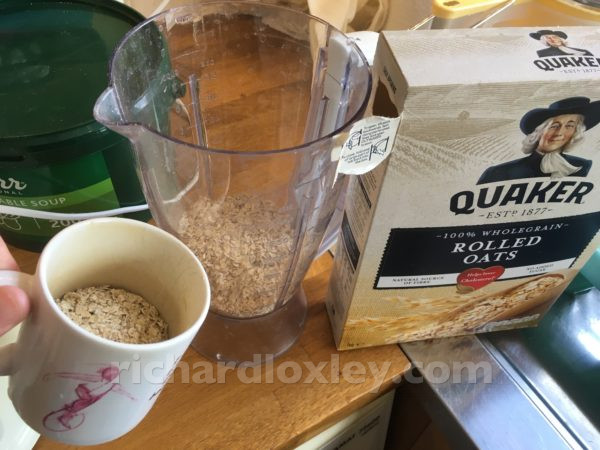 I add 6 mugs of water (so it’s a 4:1 ratio of water to oats). That also fills my blender, so I don’t have to measure it out each time. 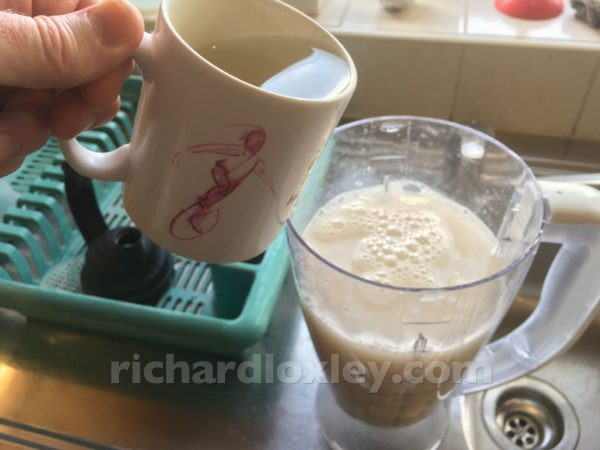 I blend for about a minute.  I have a really cheap blender, and for blending other things I find it works better if I do 15 seconds, then pause to let everything settle, then about 3 bursts of a second each with pauses in between, then repeat.  I don’t know if that’s necessary for this, but it’s what I’ve been doing so far! 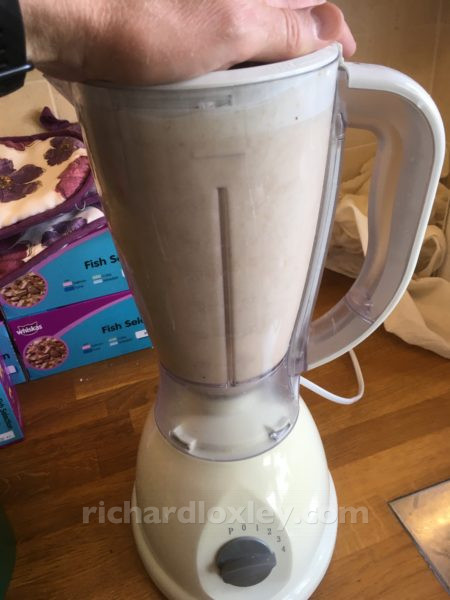 I have two jugs that are each big enough for the whole mixture.  I have a fairly fine metal sieve. 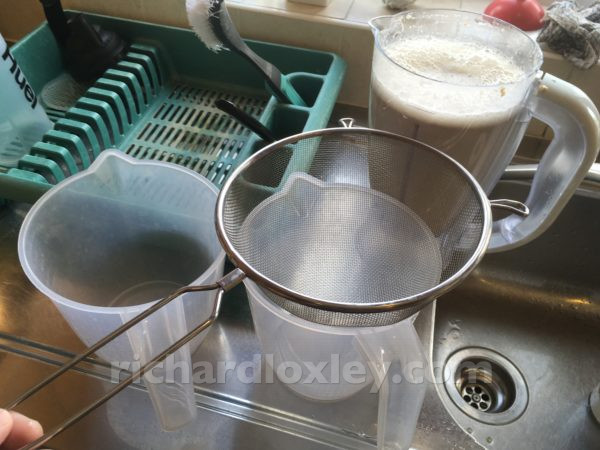 I strain the mixture through the metal sieve. 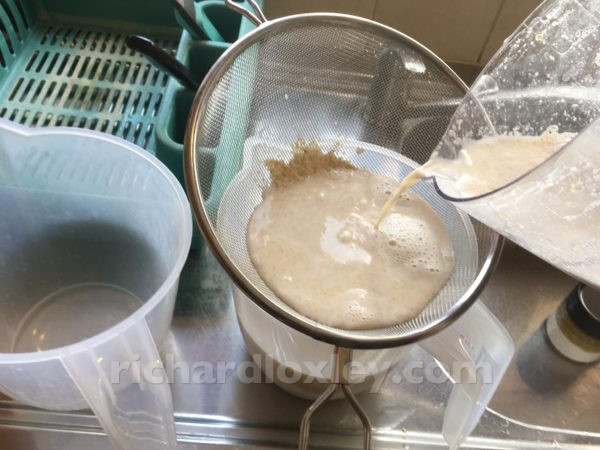 The sieve gets clogged up, so I have to push the residue to the side with a spoon from time to time. 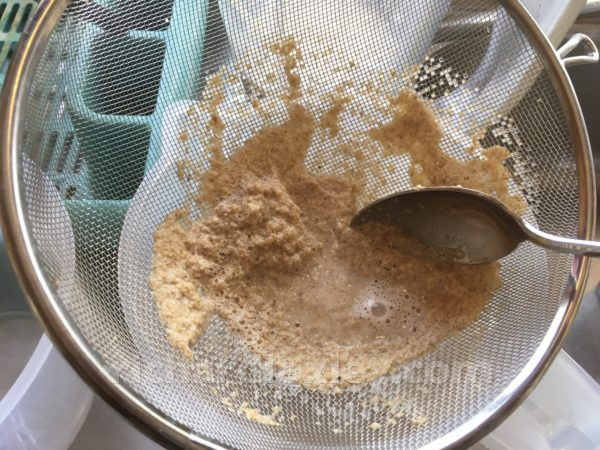 I’m left with this. 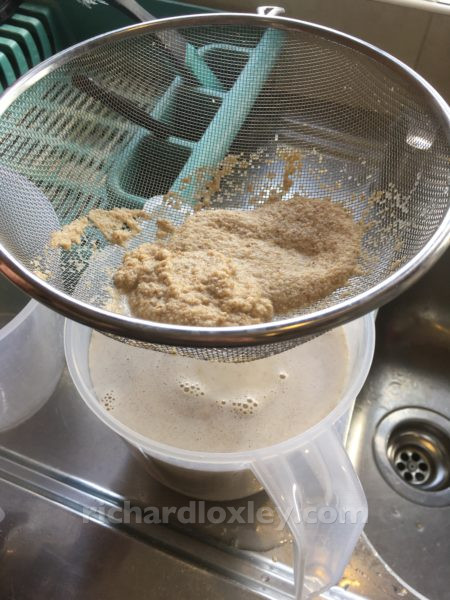 I discard the oats and compost them (some people use them as the basis for other recipes).  I rinse the sieve under the tap to clean it. 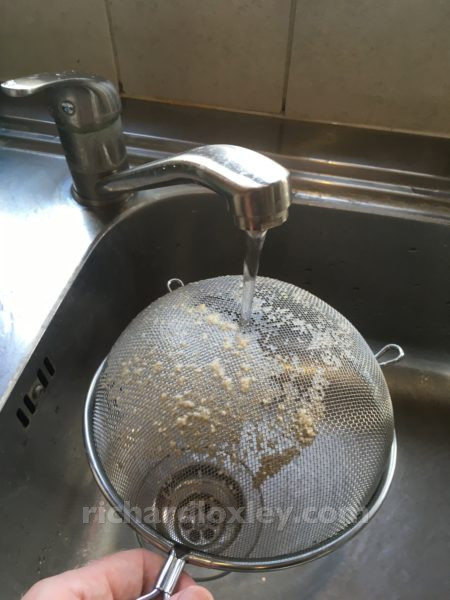 Then I repeat, sieving the mixture into the other jug, until there is very little residue being caught.  Each time I also rinse the other jug to clear out any residue left in the jug.

In this case I did it 9 times, and this is what was left on the final time.  I might be able to get away with sieving it only once or twice, but the more residue you can remove in this stage, the easier the next stage (and the metal sieve in this stage is far easier to clean than the muslin I use in the next stage!) 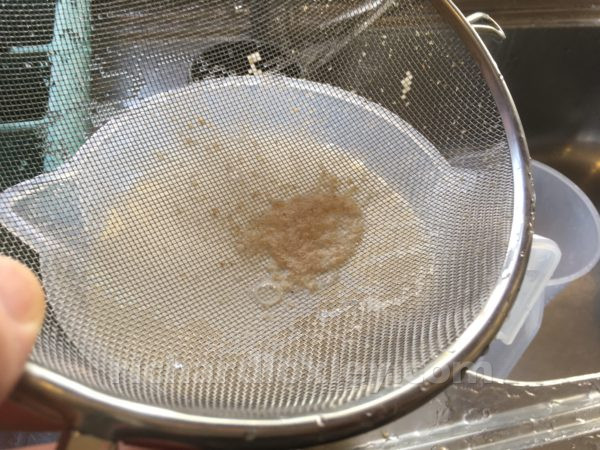 Next a use a smaller sieve as a holder for a muslin cloth (I use this one just because it fits exactly in the jug so it’s easier to hold). 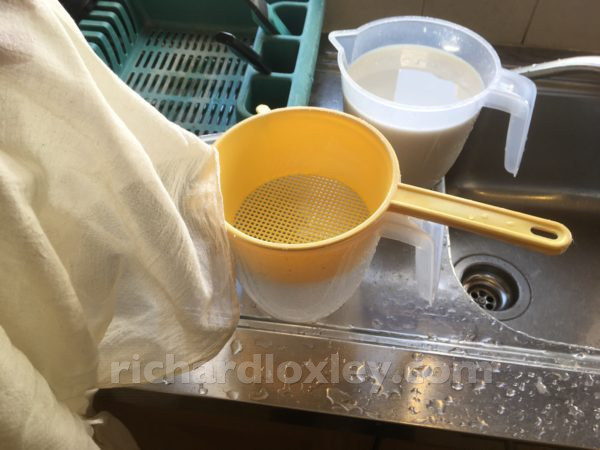 It’s a fine-weave muslin, and I fold it in half to make a double layer.  I did have the suggestion of having the second layer at a different angle to the first layer, but I didn’t find that helped. 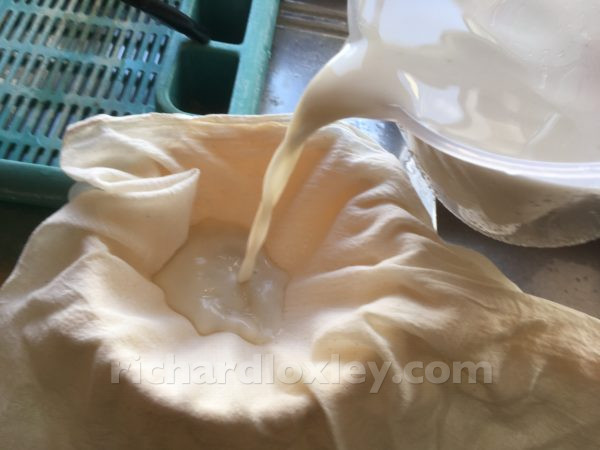 I pour in the mixture and let it drain through. 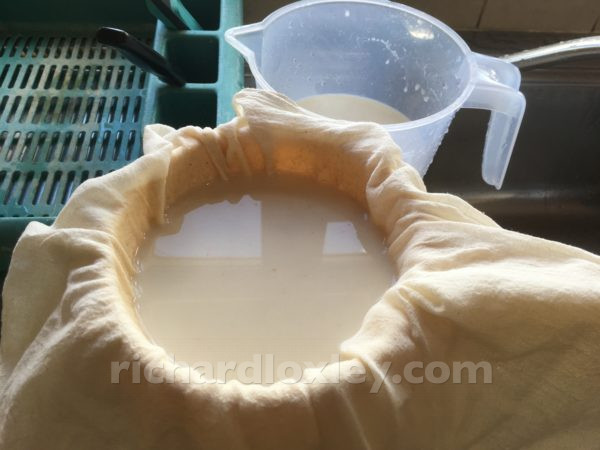 Eventually the holes in the muslin get clogged, and no more liquid will drain through.  At that point I pull the muslin over the sieve so that a fresh piece of cloth is revealed, and the draining can continue. 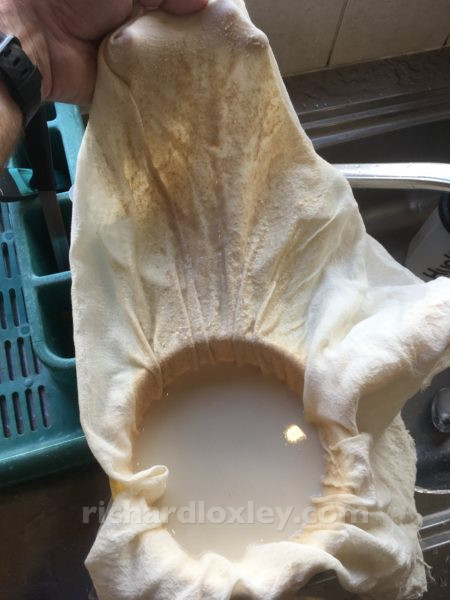 The cloth is just big enough that I can get all my batch through just as the whole cloth gets clogged up.  It now looks like it’s covered in baby vomit :-( 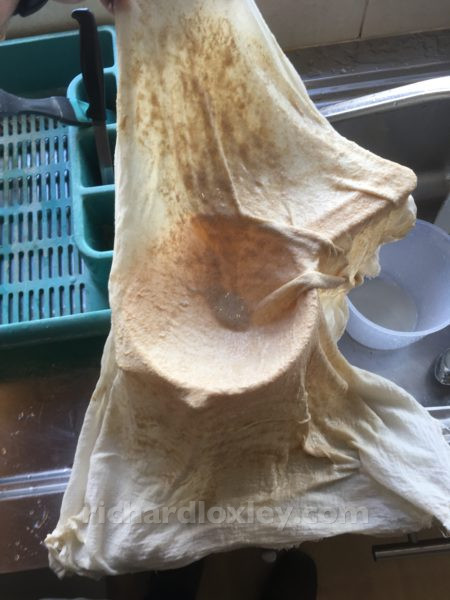 If you have enough room to spread out the cloth, you can scoop up some of the residue to make it easier to clean. 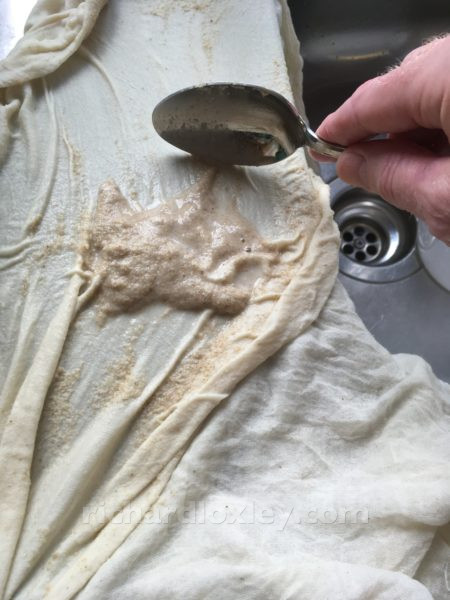 I then run the muslin under the tap. 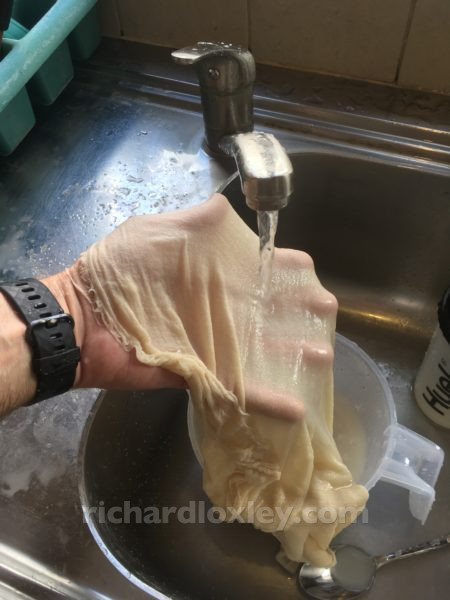 And dunk it in the other jug to clean. 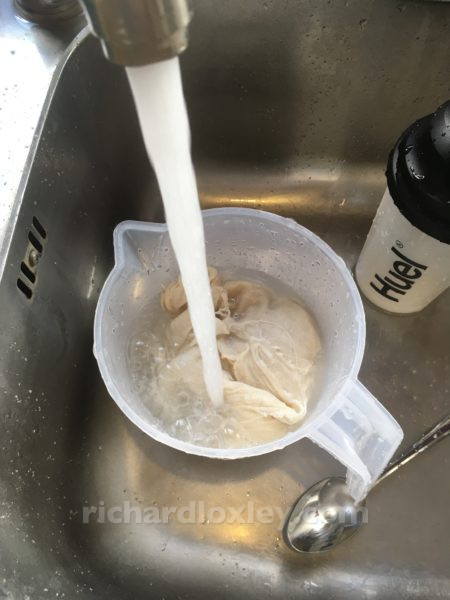 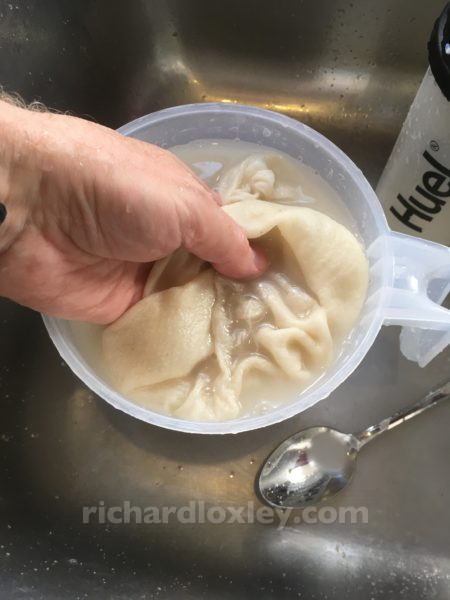 Finally wring it out. 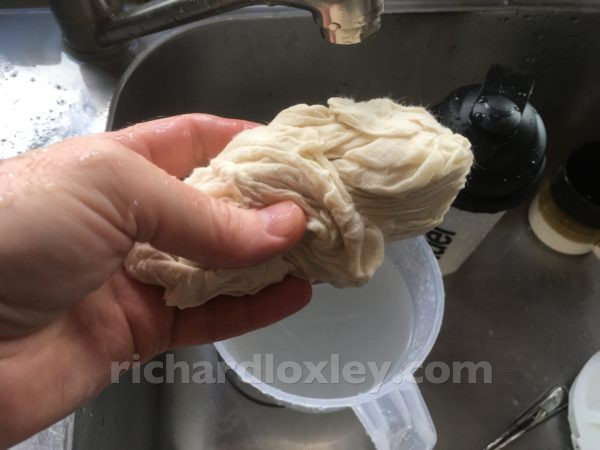 Then I repeat the straining using the newly cleaned muslin, back into the other jug. 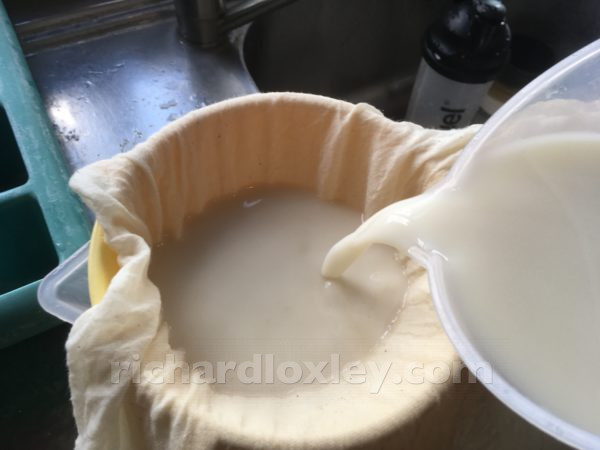 The second straining goes really quickly, so it might not be necessary.  However about a third of the muslin gets clogged up, so it is still filtering out sludge. 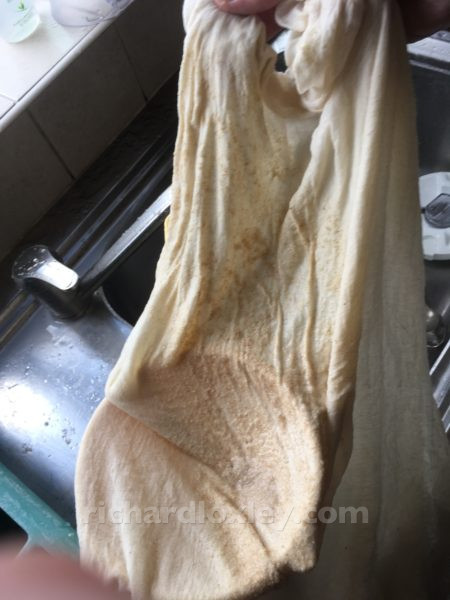 A final clean of the muslin. 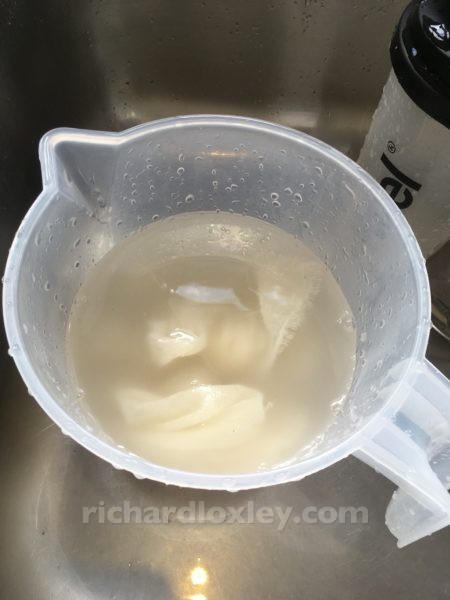 And hang it up to dry on the handles of my kitchen cabinets. 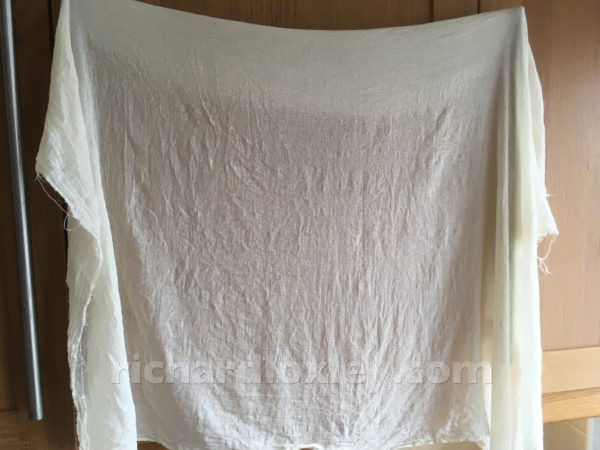 I store the oat milk in the fridge.  These shaker cups for powdered drinks are good for storing it as they have a spout for pouring, and the grid helps mix the oat milk when you shake it just before you use it. 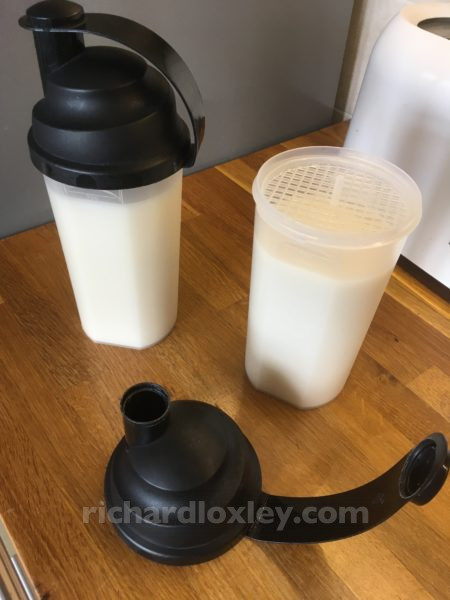 And the clear sides show you why you need to shake it after it settles for a while! 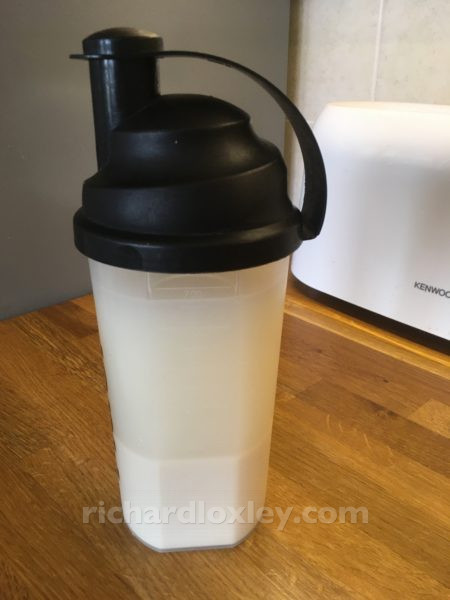 And a lovely cup of tea using the oat milk. 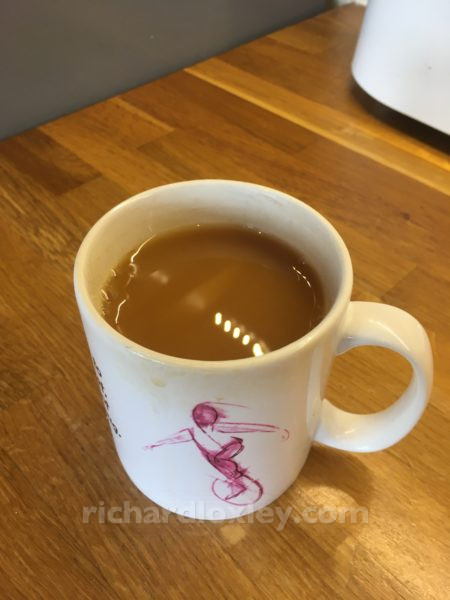 And no sludgy residue at the bottom! 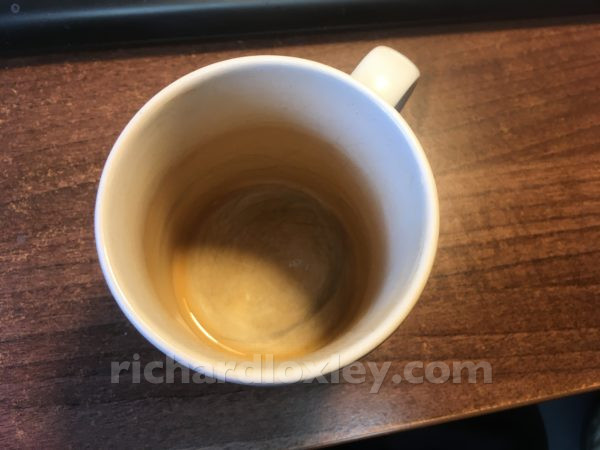 I don’t know what pitch of weave my muslin is, but this picture may help work it out. 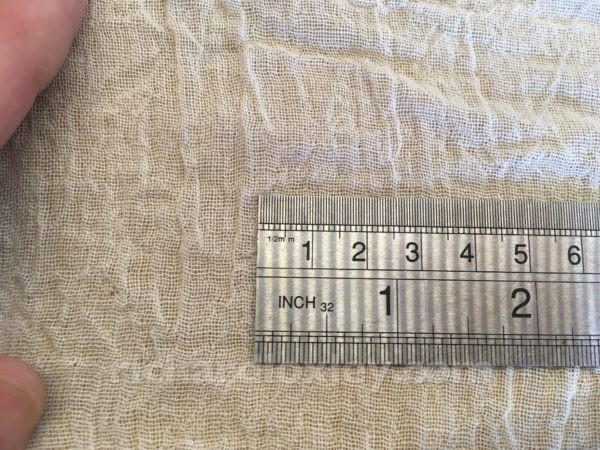 And this is how fine my metal sieve is. 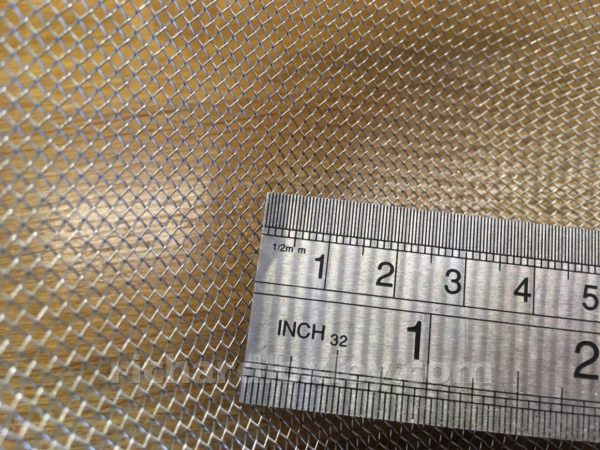 Hmmm, after 3 successful batches, I had one failure again! The same sludgy residue at the bottom of my tea :-(

So I tried filtering that batch again, this time with a single strain through a quadruple layer of muslin (I didn’t want to take any chances). It went through very quickly, but did seem to have some sludge left on the muslin.

I’ve had two drinks so far of the re-filtered batch, and it seems ok. So it seems to be down to the level of final filtration with the muslin.