I’ve made a foot-operated water pump for use when camping.

It uses a foot pump designed for a boat or caravan, and an articulated microphone stand to hold the ‘tap’. A non-return valve at the tap end stops it dribbling after you stop pumping. 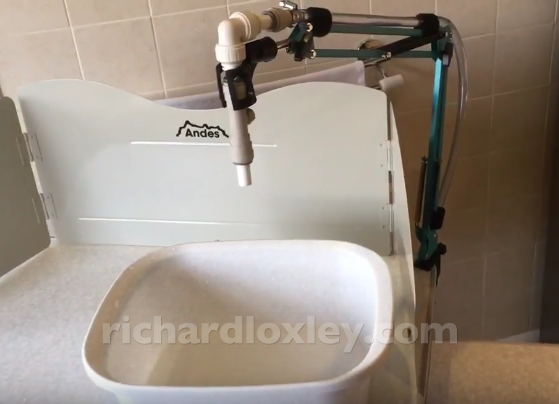 Here’s a video of it in action:

Here’s an exploded view of all the components (click to enlarge): 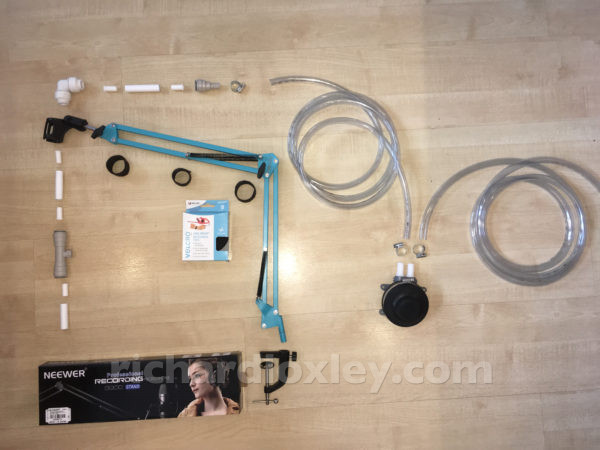 You don’t have to buy all the plumbing components from the same manufacturer, but be aware that with push-fit plumbing you need ‘pipe inserts’ to go inside the plastic pipe to make it rigid enough for the push-fit joints.  The pipe is defined as 15mm outside diameter, but there is no standard for the inside diameter.  Thus you must buy the pipe inserts from the same manufacturer as the pipe to make sure the diameter is correct.  You can use push-fit joints from any manufacturer.

This is the microphone stand I used, which is articulated like an anglepoise lamp.  Any style of microphone stand (including floor-standing boom stands) should work provided it has a standard holder for a hand-mic. 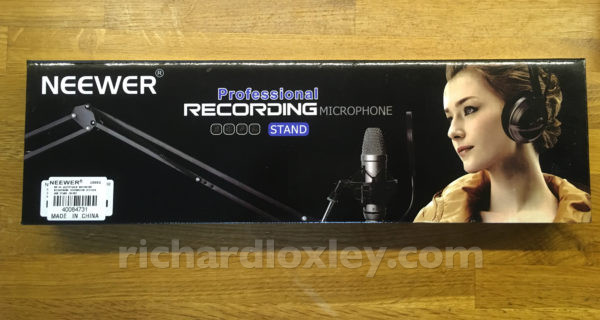 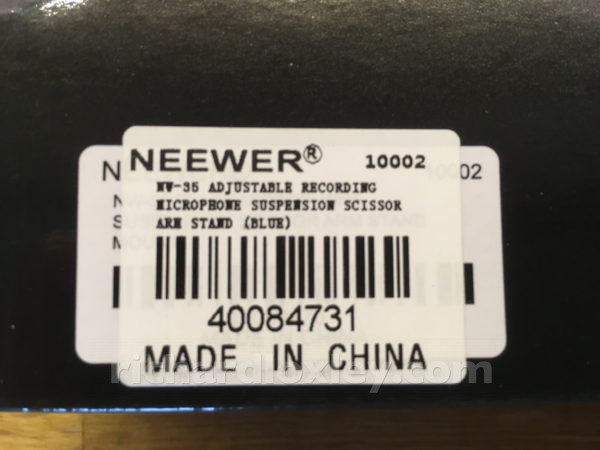 This mic stand clamps onto my camping kitchen unit: 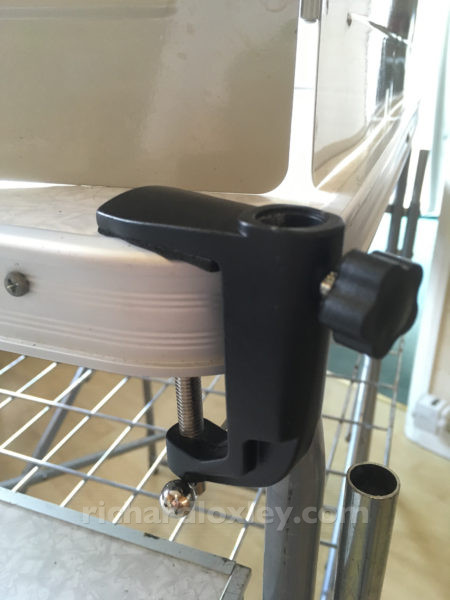 The clamp broke on first use.  I suppose I shouldn’t expect anything less for only £6.50!  I managed to repair it enough to work. 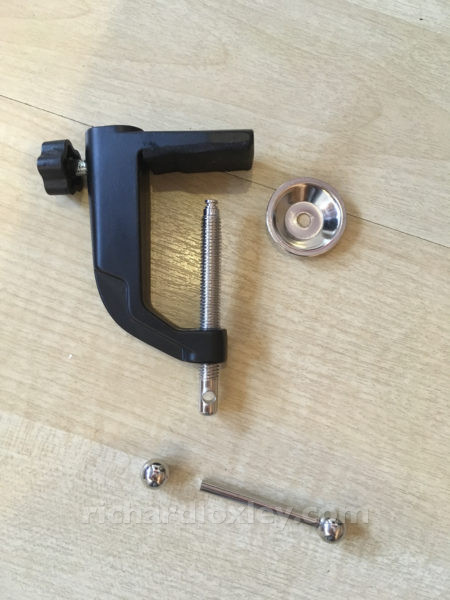 The hose is loosely attached to the microphone stand using Velcro ties.

Here’s a close-up of the ‘tap’ assembly.  There is no actual tap, just pipe for a nozzle and a non-return valve to ensure that the water stops as soon as you stop pumping with your foot.  Without the valve, air would enter the pipe when you stop pumping, making the water in the pipe dribble out slowly. 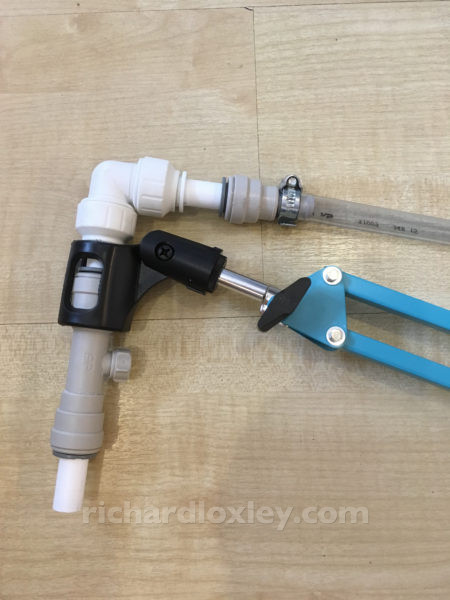 The elbow joint means the hose can come in from the back rather than the top, and also ensures the ‘tap’ stays in the microphone holder as it is slightly wider than everything else.

I’ve used a push-fit connector to connect the hose to the rigid pipe.  That means the hose can be removed quickly to pack everything away.

This is actually the third-generation design.  The first design used rigid pipe all the way up to give structure instead of the microphone stand.  It also lacked the non-return valve.  It worked well apart from dribbling when I stopped pumping. 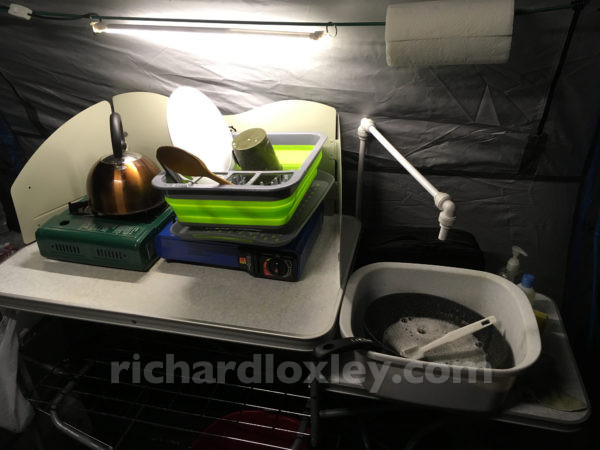 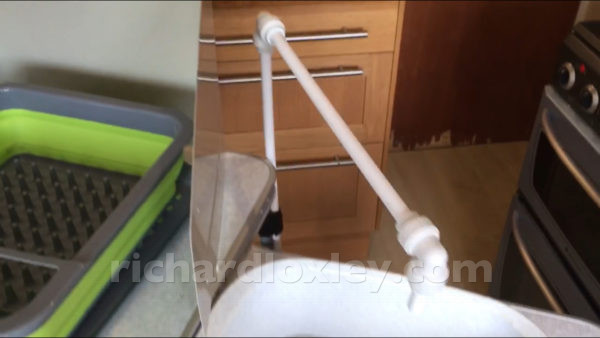 The second-generation design added the non-return valve, but I found that the weight of the valve caused the pipe to droop.  I added a cross-bracing strut made of extra plastic pipe, but it wasn’t enough to stop the droop over time.  Plus the glue failed after the first week of camping. 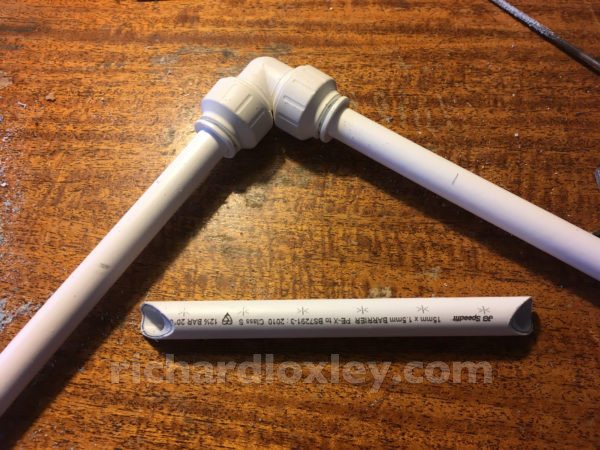 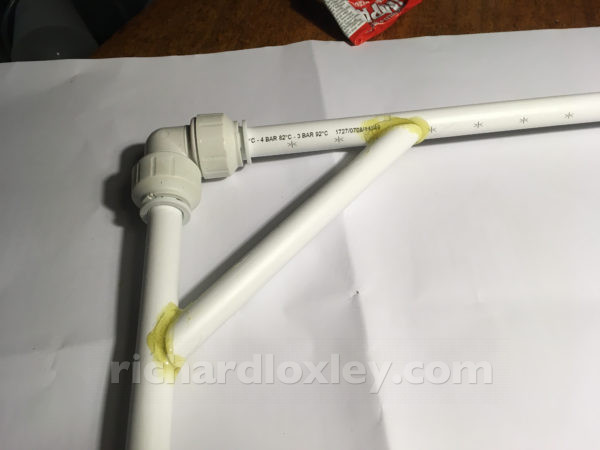 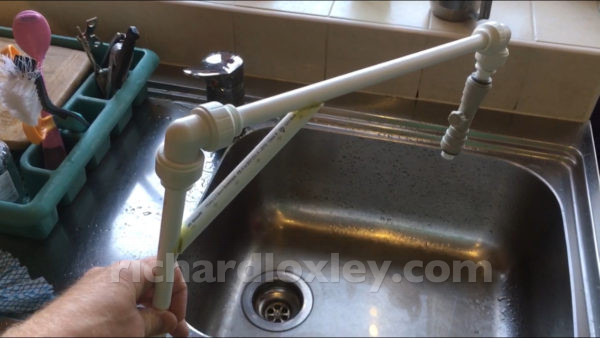 Let’s see how the third-generation design holds up!