After a too-long 5 week break, Will’s art class started up again this week.

Since this is the start of another term, Will is repeating the syllabus, and I can choose to follow along if I think it would be useful, or do my own thing with the materials provided.

I asked Will’s advice, and he suggested joining in with the pencil sketching, but do it freehand rather than using the grid system he teaches the beginners.  He also suggested doing a face as it’s good for practising shading, and he has a lot of experience with portraiture that he can help me with.

I looked at the pile of sample pictures, and the top two both appealed to me.  In the end I chose the smiling face of a girl in a hoody.  Smiles are always good! 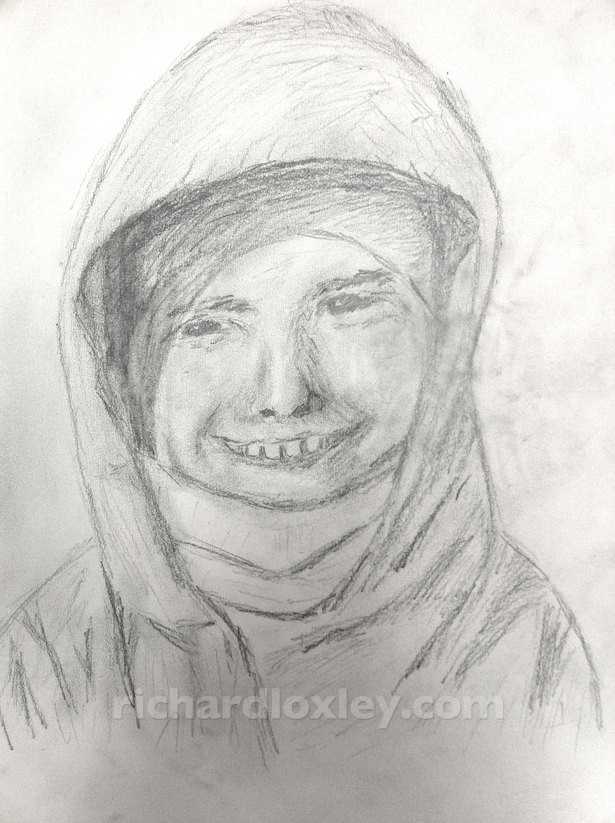 Will came round twice to offer advice.  As usual it was absolutely spot-on.  (At a rough calculation, once he’s done his demonstrations, he has about 2 to 3 minutes per person to give individual advice.  So he seems to have developed the skill of spotting exactly what a pupil needs to work on very quickly!)

The first time he came round he noticed I was obsessing with very precise detailed edges on the drawing.  He did a quick sketch of the same face showing how to build it up using textured shading, ‘sculpting’ the contours of the face, rather than focussing on edges.  It was a big help!  I hadn’t really enjoyed the pencil sketching last time as much as the other media, but now it became fun :-)

The next visit he took one look at the sketch so far and told me I needed to move the corners of the mouth up and make the teeth smaller.  I hadn’t noticed, but he was right.  Once I’d corrected that, the girl looked like a girl again, and not in her mid-twenties as I’d drawn it!

This was the first portrait I’ve done from a photo rather than copying the style in another portrait.  I’m pretty happy with it. 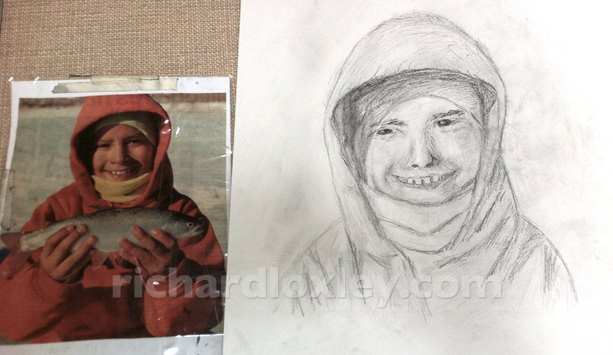