When I grew up, the Commodore PET was one of my favourite ‘aspirational’ computers.

It had already been around for about 3 years by the time I got into computers in 1980, and technologically was way beyond anything else I had came across: decent keyboard, decent graphics, built-in green-screen monitor, disk interfaces, etc.

It also had an archetypal look that you associated with a monolithic computer.  Indeed when the Hitchhiker’s Guide to the Galaxy transitioned to TV, its Deep Thought super computer looked suspiciously like a giant Commodore PET.

So I’d always wanted a PET.

About 15 years ago a friend who knew I collected old computers mentioned he knew a colleague who had one he wanted to get rid of.  I arranged to buy it for a ridiculously reasonable sum (perhaps about £40?) and went round to the guy’s house.

When I arrived he said he’d tried powering on the PET, and it no longer worked, so he didn’t feel right charging me anything for it! So he gave it to me free of charge, along with one of several Mac Classics he’d got lying around that he was trying to shift.

It was the professional badged version (CBM = Commodore Business Machine, as that sounded more professional than PET = Personal Electronic Transactor). It was the 8032, and came with the 8050 double disk drive.

When I got it home I decided to see if I could fix it.  I plugged it in, and amazingly it booted up! But then over the course of the day it randomly worked, or was completely dead, each time I powered it on. So some intermittent fault.  I looked inside to look for obvious loose connections, but no such luck.

I then put in in the loft with my other computers, and left it until I had more time to sort it out.

Today I took a break from my other retro computer projects to see what state it was in.  I recently came across Tynemouth Software, who offers a repair service for vintage computers, specialising in PETs.

I’d been thinking about contacting him to arrange a repair, but he’s up near Newcastle, a very long way from me.  But I have two friends in Newcastle, and I’ll probably be seeing them next week, and again in about 2 months time.  So there might be an opportunity to get the computer delivered and retrieved without risking a rare and delicate computer to a random courier.

So I got the PET down from the loft.  Sadly I’ve found it has a bit of rust now on the top of the monitor and the top of the disk drive.  I had the roof replaced a few years back, and although I covered everything with plastic sheets, it seems a little moisture must have got underneath :-( 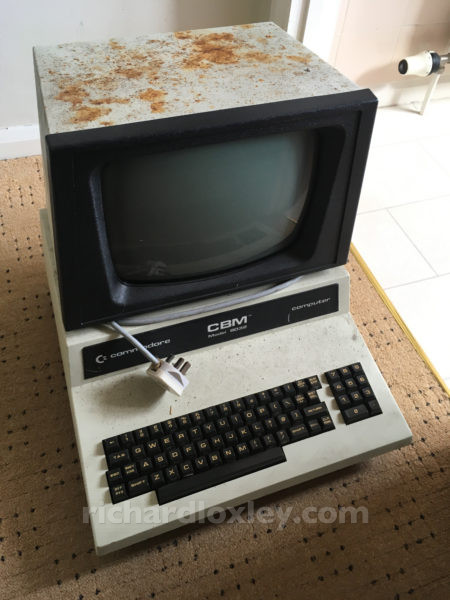 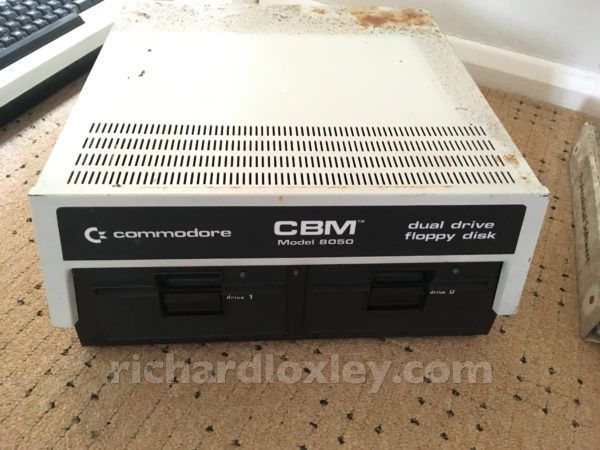 I wonder what the best way is to remove the rust?  I could remove it with wire-wool or similar perhaps, but I guess that would leave me with bare metal, and painting it to match the rest of the case could be difficult.

I still have the original manuals for the computer, disk drive, and BASIC, and some software manuals.  No disks though: 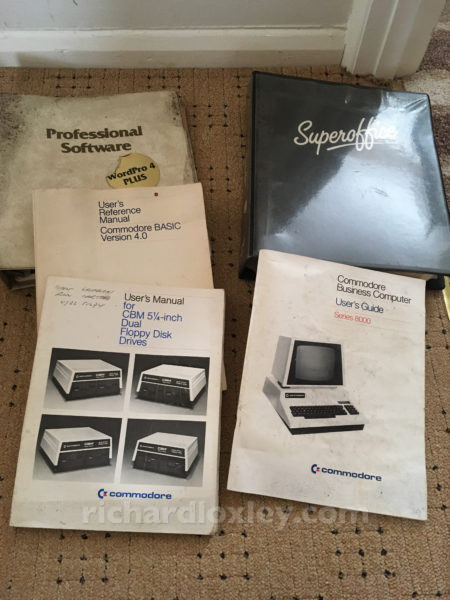 It came with a box of cables and some interesting looking “PET-SWITCH” switch boxes.  I think they allow sharing the disk drive and printer between machines? 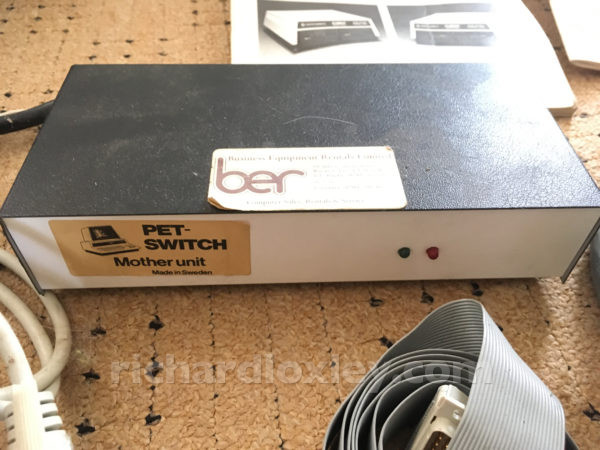 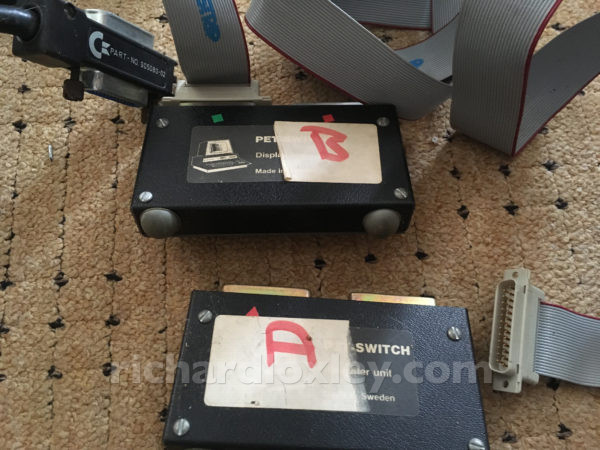 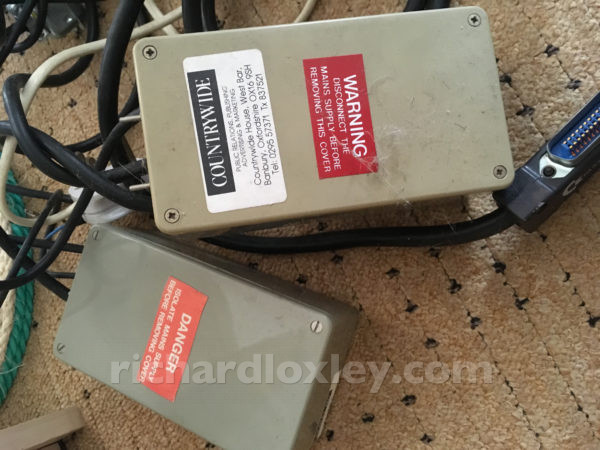 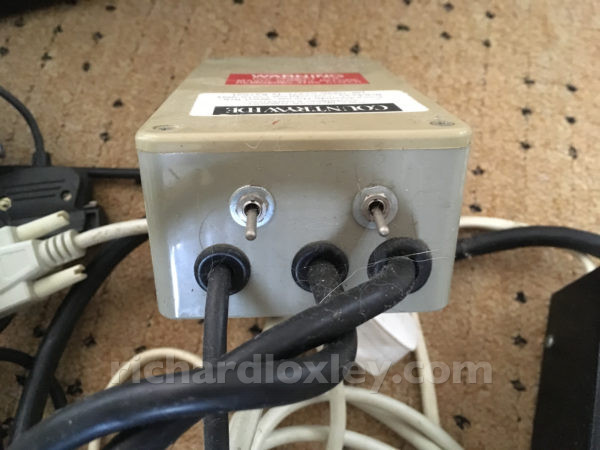 I tried powering on the computer, and it does start up this time.  But I get random characters on the screen, which then scroll up the screen as if it’s outputting messages that are getting corrupted: 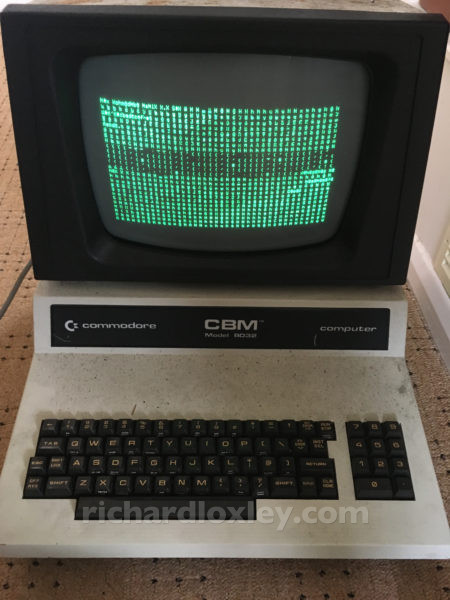 It seems to be putting out a message top left that is corrupted, and then random characters fill the screen, but only in every other character position.  Presumably some artefact of the way the data is transferred? 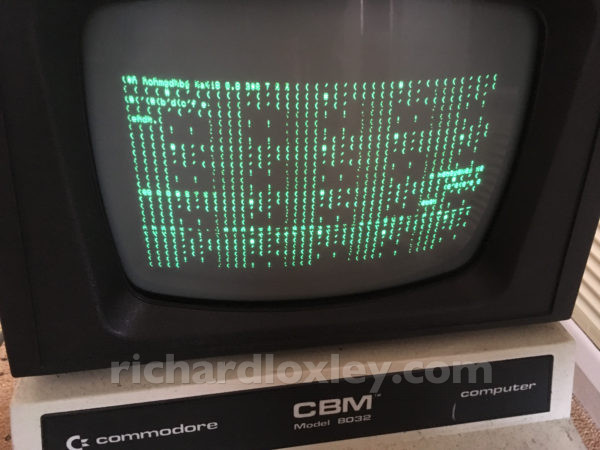 The characters seem to be mostly well-formed.  Some look non-standard, but I do recall that the PET had some unusual characters in its ROM. 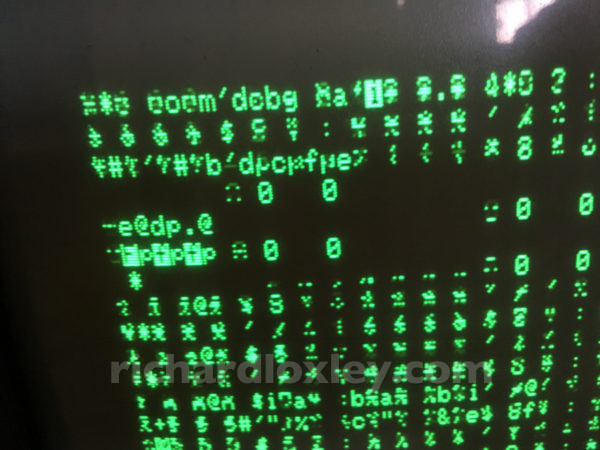 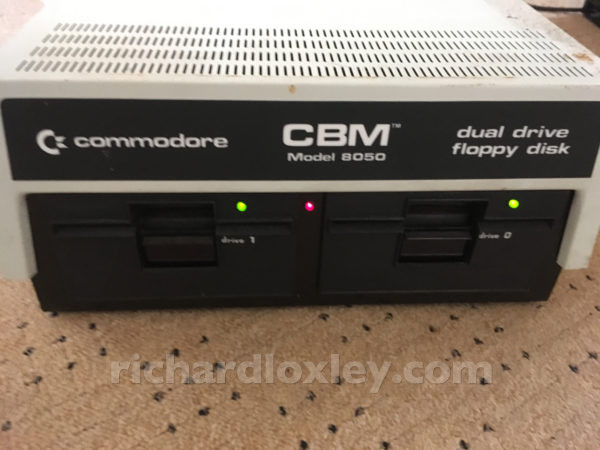 I then heard a buzzing sound, which at first I took to be a drive motor spinning up.  But it started to sound more like a crackling sound, so I turned off the power.  The crackling continued for a few seconds, and I smelled a mild burning smell.  Oh dear.

Time to open her up: 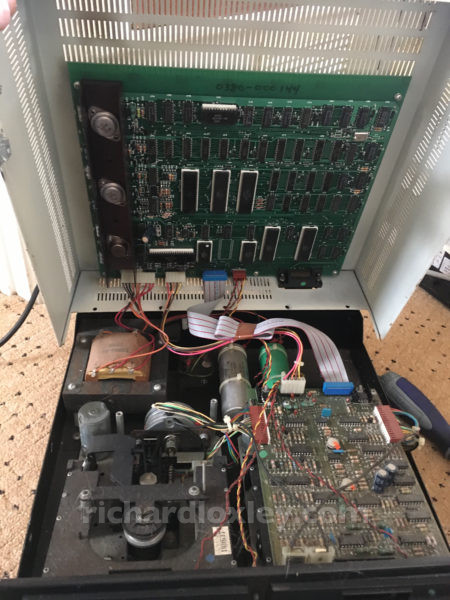 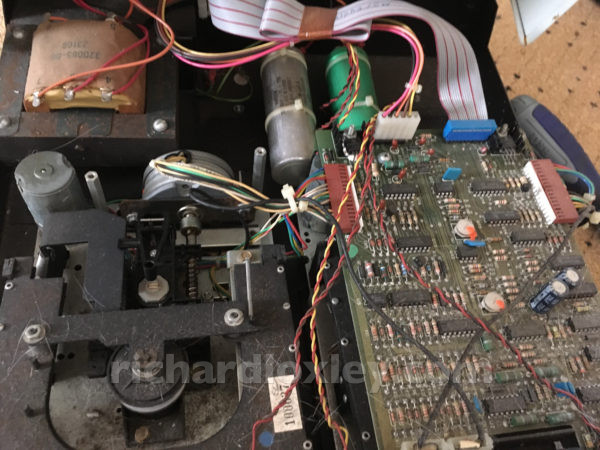 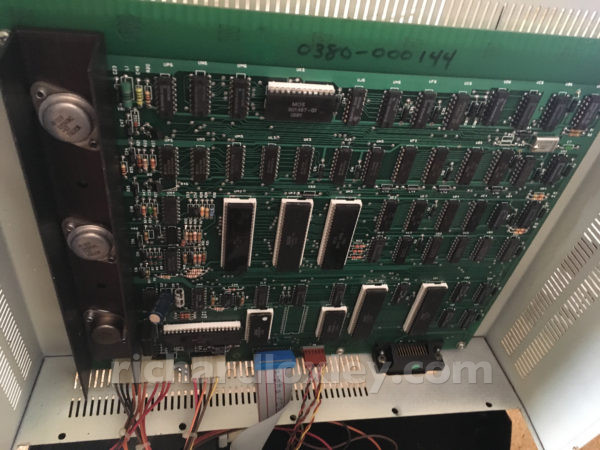 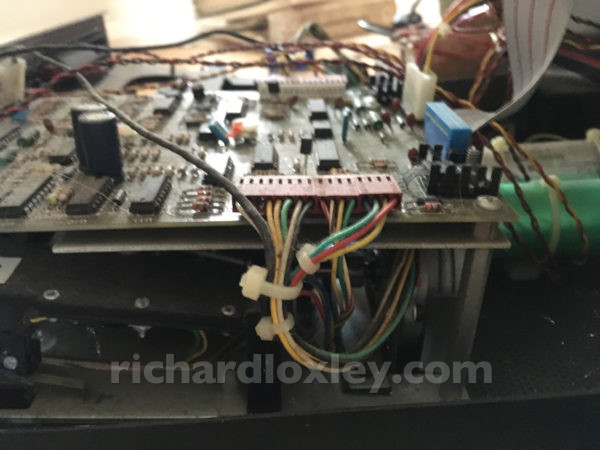 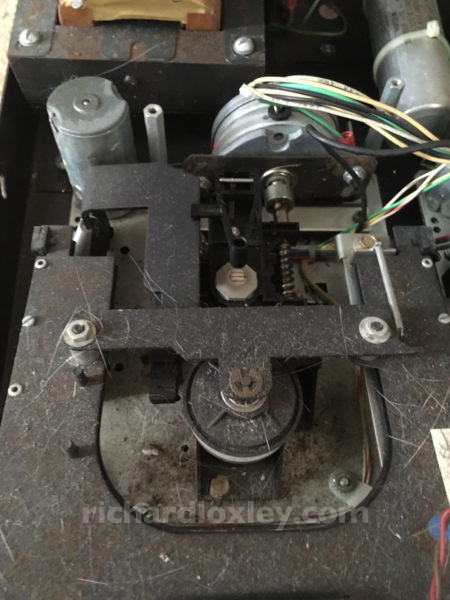 No signs of much amiss. 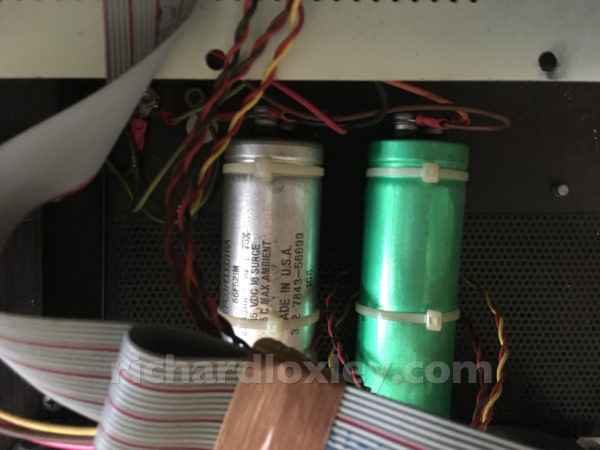 So I followed my nose.  The burning smell is coming from this huge transformer: 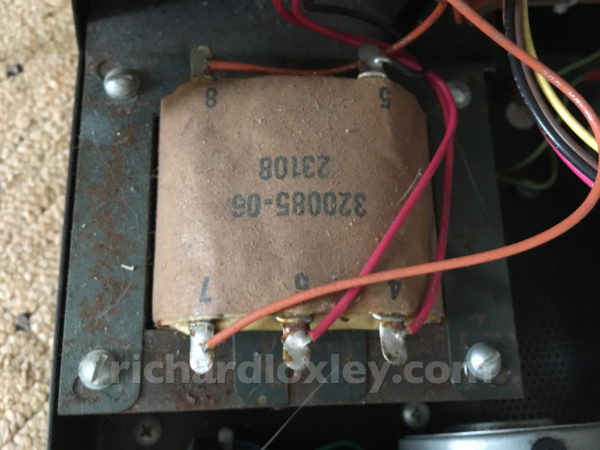 So I guess this needs replacing.  Maybe worth just pulling it and replacing with a modern power supply.  I’ll probably have to do some research on these drives and see if I can find more about them.

There is a question of whether it’s worth fixing it?  I don’t have any PET disks to use with it.  At some point I want to get a solid-state disk emulator working with it.  Tynemouth Software sells something appropriate for that, which I might get when I can afford it.  I do have the HxC/Gotek Shugart disk emulator, but the PET uses IEEE-488 instead.  I wonder if there’s a way to build something that can interface the two?

But even if I do get solid-state disks on it, it might be nice to be able to copy files onto real floppies.  I’ll have to find out if the PET MicroSD supports that?

(Edit: here’s some pictures of the insides of the PET, just because.  I love its flip-top lid allowing easy access to the innards.) 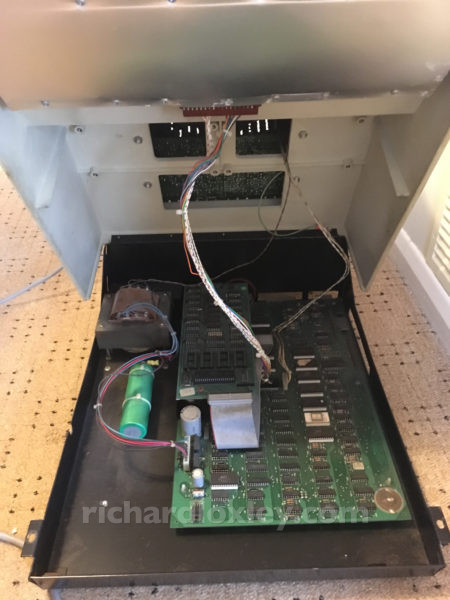 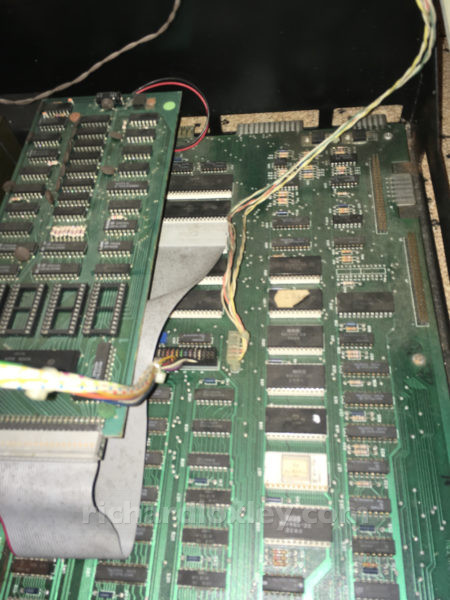