Today is the first day of the Retro Challenge – a one month semi-formal excuse to do something cool with retro computer technology throughout April.

I only found out about this a couple of weeks ago.  I’ve just spent March planning and prototyping a retro computing project, but I haven’t started the main build yet.  I’d also been vaguely thinking about publishing my progress somewhere so others could appreciate what I’m doing.  So this seemed the perfect excuse!

Here’s me surrounded by the technology I’ll be playing with: 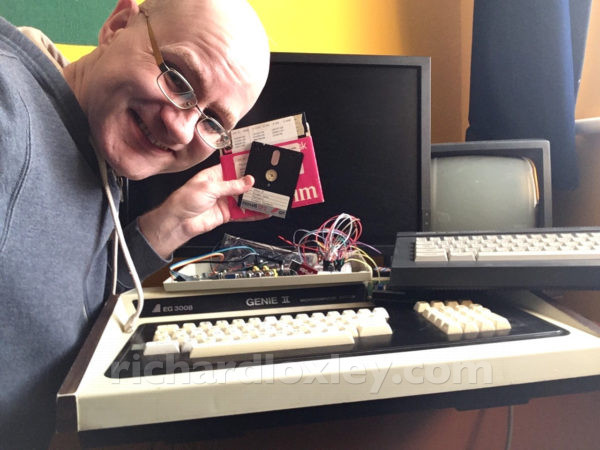 And this is the project description I submitted for the Retro Challenge:

I collect 1980s computers. But they are gathering dust in my loft, and I’d prefer they were being used.

My project is to build something that will make 1980s computers easier to use in the modern world:

There are some products that already do some aspects of these, but no-one does an all-in-one box that can connect to an old computer and “it just works”.

I’ll be testing it on my EACA Video Genie EG3008, and my Amstrad CPC 464 and 6128. But it should work with most computers of that era, and I hope to eventually use it with my BBC Micro and TI99/4a.

I’ve only just found out about the Retro Challenge but I’ve actually been planning this for a while! I spent March creating the design, and testing some technology that I’ll use.

So for the challenge I’ll start by blogging about my design process, and then carry on with the actual build, blogging as I go.

To elaborate a bit more…

It all started when I reminisced about the old BASIC and Z80 software I wrote on the Video Genie and Amstrad CPC 464 in my teen years.  The Video Genie software is long lost, but the Amstrad code I wrote is still on a collection of 3″ disks.

So I set about looking for ways to extract them to a modern computer.

First off, I checked the Amstrad still worked and could read disks.  It turned out I needed to repair the disk drive first.  Having done that I could go and buy a floppy emulator.

Whilst I had the Amstrad out, I wanted to play some games in colour, rather than using the green-screen monitor.  But my modern LCD TV had problems coping with the Amstrad RGB video signal.

That led me into a rabbit hole reading up the minute details of how 8-bit computers faked a 288-line progressive video signal (generally known as 288p) inserted into a 576 line interlaced (576i) PAL TV signal.  Old analogue sets could cope with the slightly weird timing that resulted, but modern digital sets that have to digitise the signal can struggle.

Some people have had some success using RGB->VGA converter boards, but these try to deinterlace the signal, giving deinterlacing motion artefacts. Other people had succeeded in using Raspberry Pi’s or Arduinos to reprogram the chip on the converter boards to eliminate some of these issues.  It looked like a goer, although a bit of a challenge.

So I decided to make a retro computer ‘converter box’, that would plug into a 1980s computer, and give a VGA signal output that would be accepted by a modern LCD monitor, and would also emulate a floppy drive.

A lot of this has been done before, but I’m bringing together a number of projects, and adding some interesting enhancements.

Here’s a summary of what I’m building on, and what’s new: