After my initial research and designs, I started ordering components for the video converter part of my RetroMatic 2000.

It’s based around a GBS8200 board (or the HD9800 clone version), with extra circuits to modify the input (clean up the sync signal) and output (generate scanlines).

Here’s a scrapbook from my prototyping phase…

First component deliveries: the HD9800 frame buffer board (clone of the GBS8200 I’ve written about previously) and some veroboards for soldering up permanent circuits (after I’ve prototyped them on breadboards). 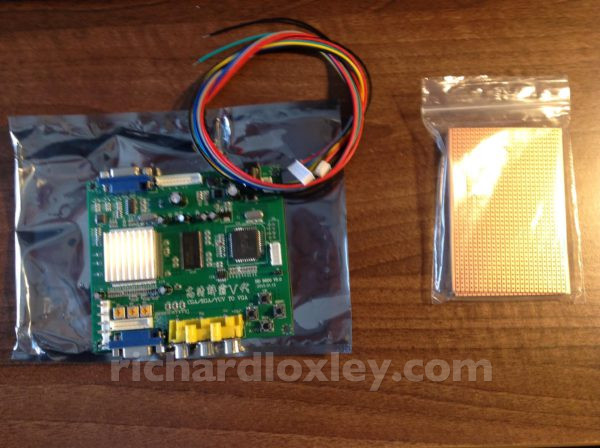 Initial cursory test of the HD9800.

I’m using a universal power adapter for now (I need to rescue an old mobile phone power supply from someone who no longer needs it).

I don’t yet have the connectors/electronics to connect it to an old computer, so just the on-screen display for now. I had to hunt around to change it from Chinese to English. You’d think they’d put the ‘Language’ menu title in both languages, but no! 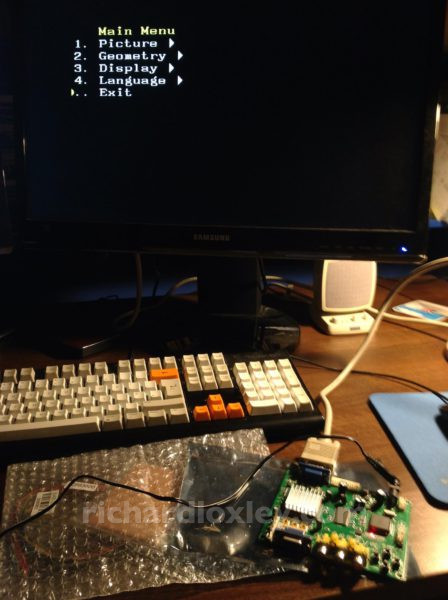 I will in fact be deactivating the chip that puts up the OSD, and replacing it with an Arduino controlling the frame buffer chip directly.

Still, it was interesting to see the OSD seemed to allow you to change the horizontal and vertical scaling, as well as the output resolution, so I may yet be able to find the right register values to put a 576 line PAL display windowed inside a 800×600 VGA output resolution, without having weird pixel-boundary scaling issues.

Parcels!  Today is the midpoint of the estimated delivery time for all my components. Let’s see what’s in them! 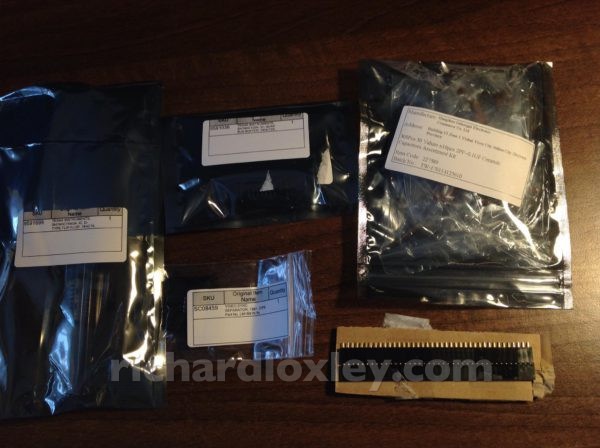 Annoyingly there is still one component that hasn’t arrived: a 3.3v-5v level converter board. I need it to get sync voltages right, and to get the Arduino serial link (5v) to talk to the frame buffer board serial link (3.3v). The claimed delivery time was Thursday. Friday’s post has been and gone, and still no sign of it

Today’s job is to redesign my circuits. Yesterday I realised that the Amstrad puts out a different video signal than I’d thought, meaning that I don’t need the sync separator for that signal. But most SCART based video does need it. So do I still put a SCART input on my video converter using the sync separator? And if so, how do I feed my Amstrad video into the converter if not via the SCART socket? Hmm.

Then I can design the converter box to do all the conversions I need! 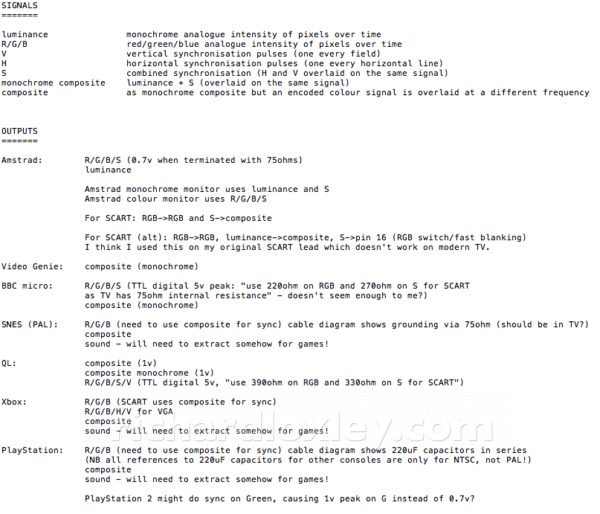 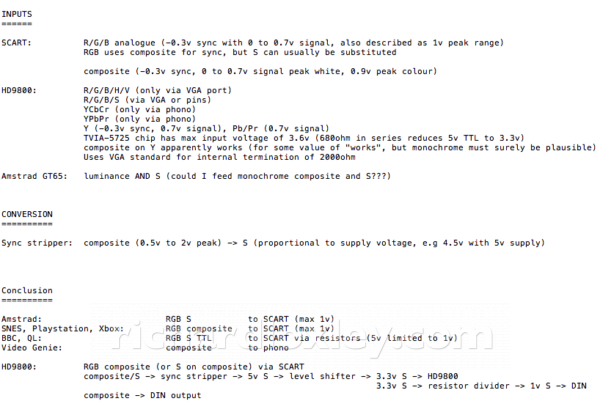 It was so small I initially thought they’d sent me the wrong component. I was expecting something 5-10 times bigger! 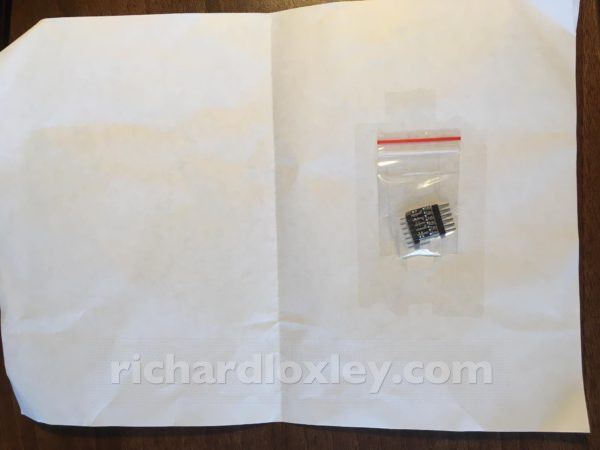 Now I have everything I need to start building a prototype 8-bit-computer video converter.

And a successful first test feeding the Amstrad RGBS signal through the HD9800 converting to VGA for the flat panel: 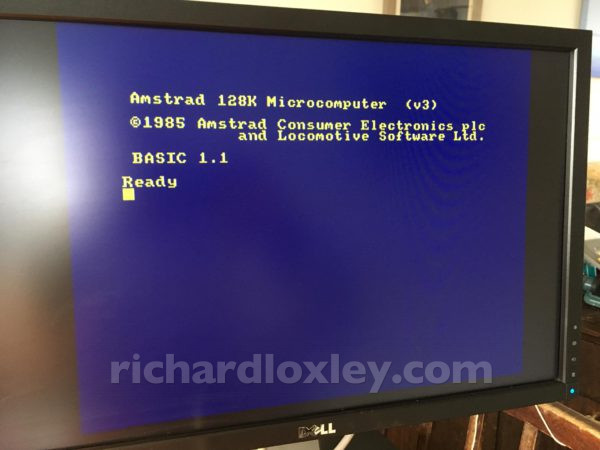 The picture isn’t perfect, and it’s trying to deinterlace a progressive signal, but my future modifications should hopefully fix that.

This is going to work I think

This is the level of my prototyping: bare wires loosely shoved into a DIN socket. 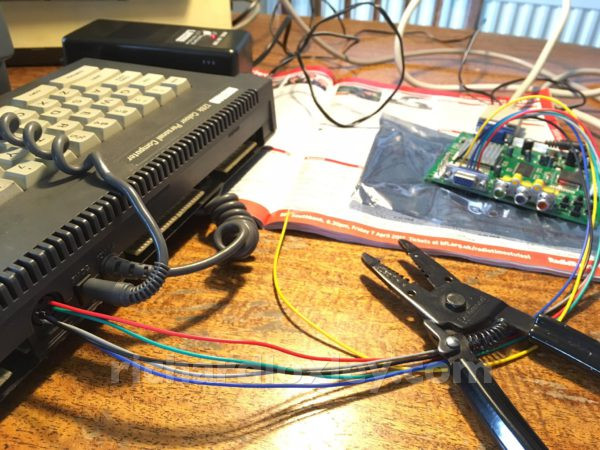 I guess I should solder up some proper cables next! 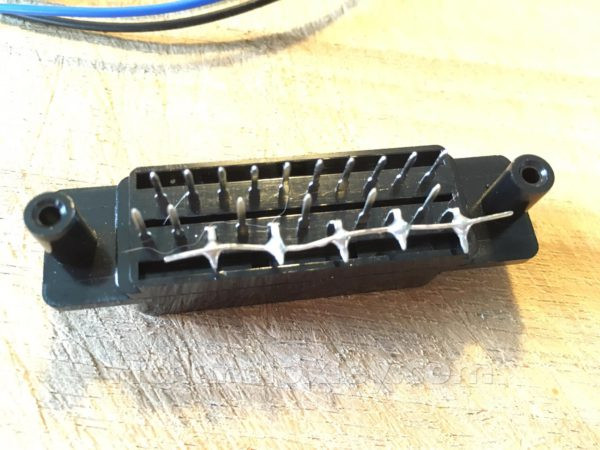 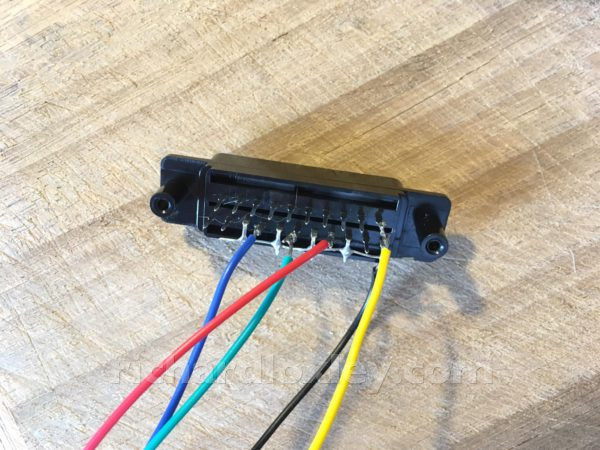 Next up: an Amstrad 6-pin DIN to SCART lead. 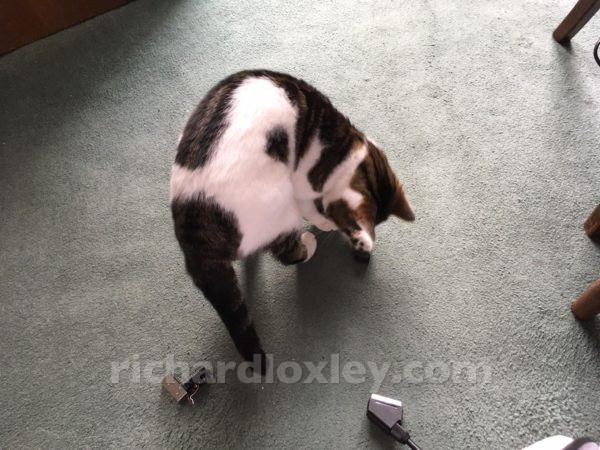 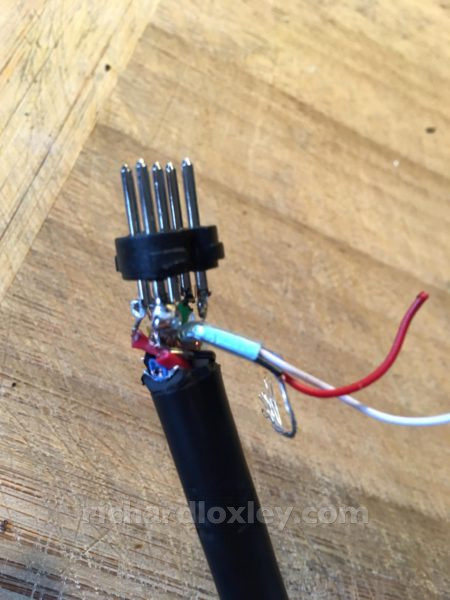 I’ve also left the 3 audio wires intact in case I want to feed the Amstrad audio into it in the future.

Hope it works. Don’t want to have to redo it

Dammit. I tested the ‘finished’ cable, and the sync signal wasn’t connected

(The sync is being sent on the composite video pin.)

Checking it carefully I find I’ve wired it to the video out, not the video in. Huh? I double and triple checked the wiring diagrams before soldering.

Duh! Whereas RGB on a SCART is straight through (one path for input or output), composite video on SCART has two paths, one for in, one for out. But because of this, the cables are ‘twisted’, the input of one end connects to the output of the other, and vice versa! So I’d wired up the wrong pin

I’ve already cut off the excess cable of the correct video wire at the DIN plug end, so my only option was to swap the wires at the other (SCART) end.

I tried to remove the SCART pins, but they have a barb to lock them in place, and 20 odd minutes didn’t budge them.

So I’ve cut the wires going into the SCART plug and resoldered them: 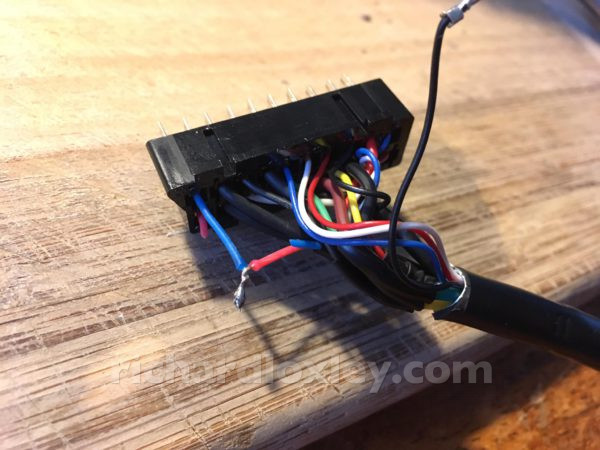 NB if I ever use the audio, I guess I’ve made the same mistake there, and will have to resolder those pins at the SCART end.

The finished Amstrad to SCART cable: 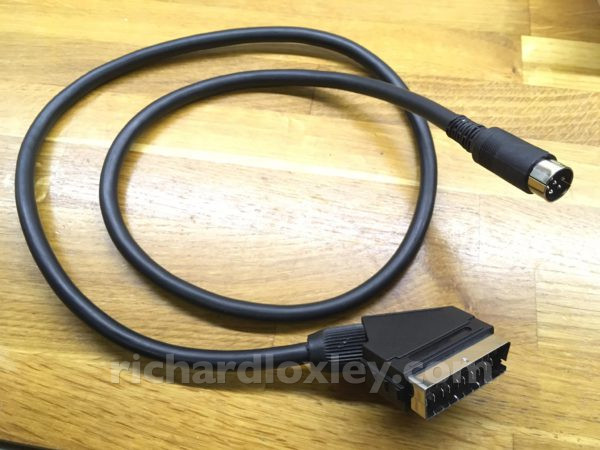 My hunch about feeding monochrome composite video into the Y input of YPbPr was correct! 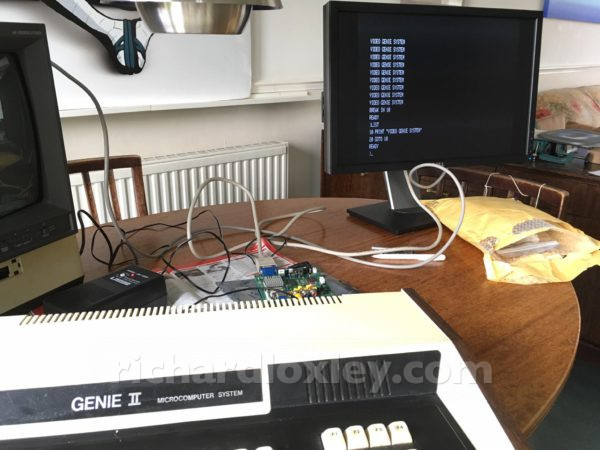 (Limitations: the picture is as wobbly as on an analogue monitor, it only works on certain resolutions, and the HD9800 is trying to deinterlace a progressive signal. My Arduino mod should fix the last one. Not sure about the others.)

Also, I’m getting random white ‘sparklies’ over the picture. This is a common complaint. One very knowledgeable techie said he got rid of them by underclocking the RAM on the HD9800, something I can try using my Arduino mod.