My RetroMatic 2000 project has two halves – so far I’ve been working on the first half: a module that converts a weird video signal from a 1980s computer to clean VGA.

Before starting work on the second half (a floppy drive emulator to load software onto these machines), I’ve been having a think about the final aesthetics of my project.

I wanted some kind of smart box to house the video board, preferably with ventilation slots as the heatsink on the video chip gets very hot. And I needed places for all the video sockets, and some switches to control it.  I’ve also been wondering whether to build the SD card floppy drive emulator (HxC) into the same case.

The pros for all-in-one are: they can share the same power supply; the bare-board HxC is available with different colour LCD displays, and the green display looks way more retro than the blue one supplied with the cased model; the Amstrad 464 requires a different configuration of pins on the floppy cable, so being in a case allows for a neat solution to switch the pins; the uncased HxC was £17 cheaper, but now the prices have gone up due to exchange rate fluctuations, but I can get the bare board at the old price, making it £25 cheaper – £25 is a lot for a plastic case (albeit a very well designed custom case)!

The cons for an all-in-one: need to find a decent case that works for both applications; more work to get it right (external buttons, slot for the SD card, hole for the display, etc); can’t use them independently. Although the only time I might want to use them independently is with the new TRS-80 as that’s too big to store it with the other computers. And I’m not 100% sure I can use the HxC with it – apparently you need to disconnect the internal drives and re-route the internal floppy cabling as it has no external drive port.

[Edit: it seems the TRS-80 Model 3 *does* have an external floppy port, but for drives 2 and 3 (the built-in ones are 0 and 1).  You can only boot from drive 0. So you can use an HxC emulator provided you have a physical floppy to boot from (you can then swap the drive numbers after you’ve booted). You only need to muck around with internal cabling if you want the HxC to be drive 0 so you can boot without a real floppy.  More info here.]

In the end I decided to wait and see what cases were available, and then decide based on practicality.

I had wondered about getting some broken 1980s computer kit and re-using the case. (I found some broken Apple II external floppy drives that might have fitted the bill.)

I’ve been searching on eBay, and then this beauty popped up. It’s a modern console project box, but random stock in poor condition. It’s dirty, and missing loads of screws. But that gives it a bit of a retro look, and it was only £5 including postage, compared to £56 for a brand new version! I snapped it up

I should be able to get both the video board and the HxC in it, and the case would lend itself nicely to the floppy drive LCD display on the vertical surface and all the buttons and switches on the sloping surface. Ports can go round the back, SD card slot possibly on the side. I’ll have to drill some ventilation holes: probably a load on the bottom, and some high up on the back. 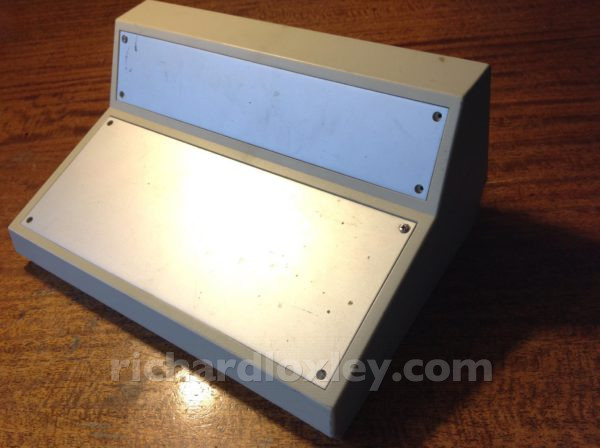 For reference, it’s a Retex Abox 3.  In fact I’ve found you can get a new one for £30.55 including postage. Still pleased with £5 of course

Here it is alongside the Video Genie and the Genie expansion unit. It certainly looks as if it came from the 1980s 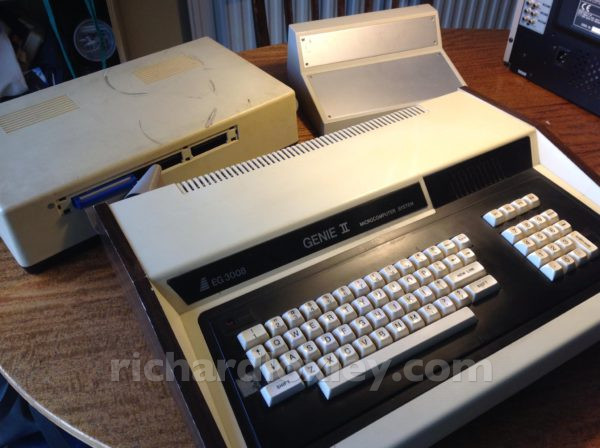 With the size of the box, I think it lends itself well to having both the video converter and the floppy emulator in the same box.  So decision made!

Thinking about the user interface, the floppy emulator I’m going to be using (HxC) uses a 16×2 LCD display.  So it would be neat to use a second LCD for the video converter, to allow it to show what mode it’s in, and have menus to select different modes.  (The original firmware for the HD9800 video board had an on-screen display, but I’m bypassing that to give extra conversion modes.)

So here’s my latest purchase: a pair of 1602 LCD displays, and a bunch of rotary encoders (left/right/click) to control the menus.  I’ve used rotary encoders before on an ESP8266 project, so I’m fairly comfortable with them, although I’m not familiar with the Arduino interrupt model, so I might need to adjust my routines to suit. 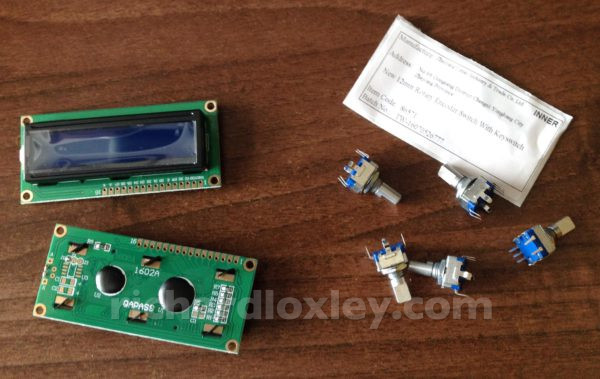 The LCDs I bought are blue, but I rather fancied green on black, to emulate the aesthetic of a green screen monitor.  So I also ordered a pair of green ones from China, but they’ll take a couple of months to arrive, so the blue ones will be a stopgap.

Connecting a rotary encoder to the floppy emulator is speculative as it currently only uses buttons. But I’m going to connect the rotary encoder to an Arduino and then get the Arduino to ‘press’ the buttons.  I’m cautiously optimistic :-)

Finally I’ve drawn up what has only existed in my imagination so far, to try to tie down all these ideas into a concrete design.  I think this is roughly what it’s going to look like: 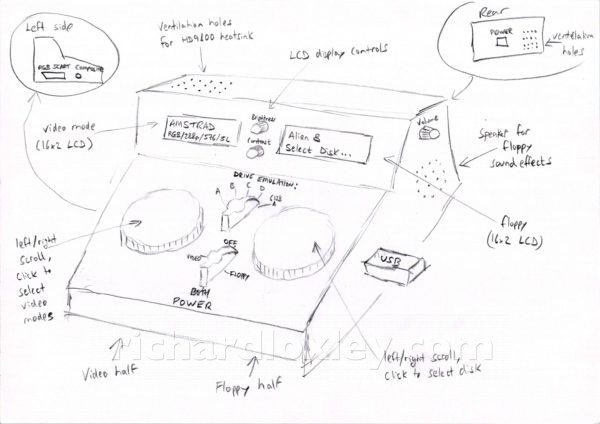