When I received it, I did some cursory testing.  It would boot to the BASIC ROM (by holding down the Break key as you reset it).

But it wouldn’t boot from disk, either from the supplied TRS-80 boot disks, nor my Video Genie boot disks.  It wasn’t immediately clear whether the fault was in the disks or the drive.

There was also some curious information about its identity.  It was sold as a Model 3, and the front definitely proclaims that’s what it is: 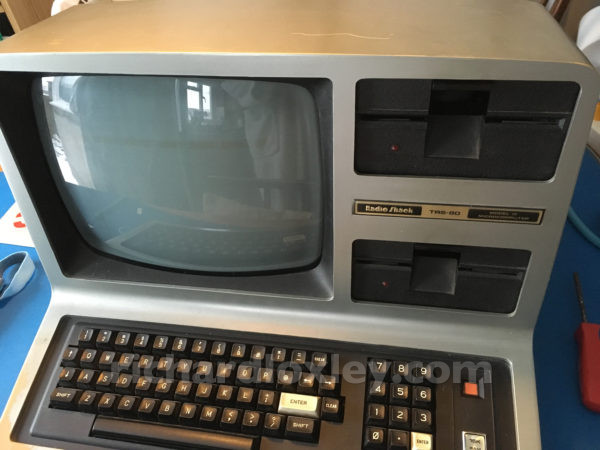 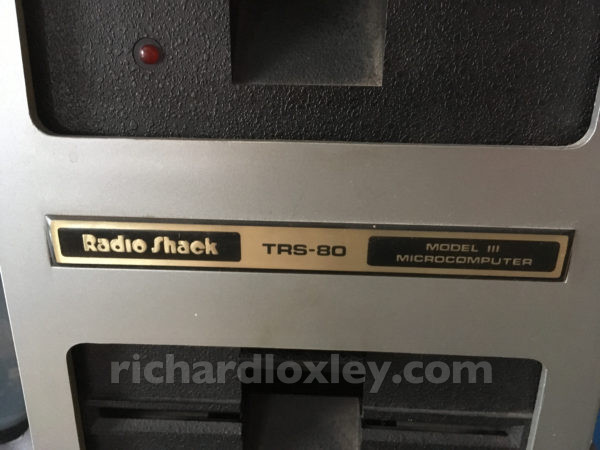 It also has a Model 3 keyboard: 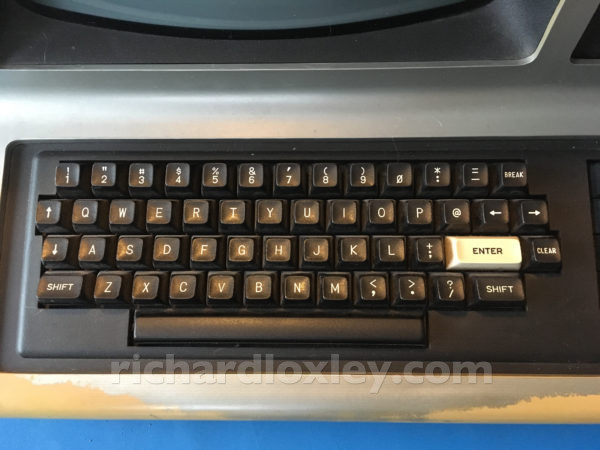 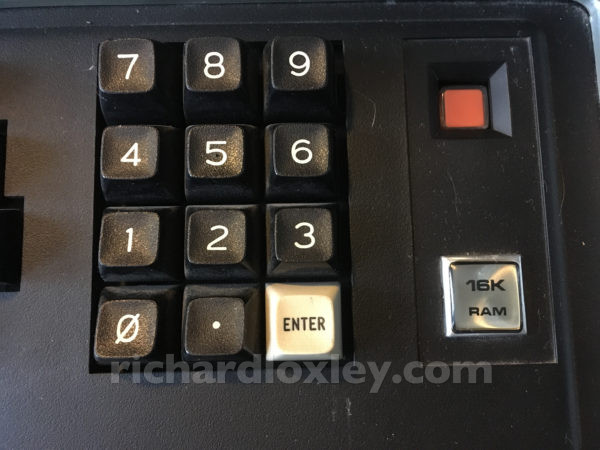 But the base is white, rather than silver.  (Model 4s are white, Model 3s are silver.)  And the label on the base lists it as a Model 4! 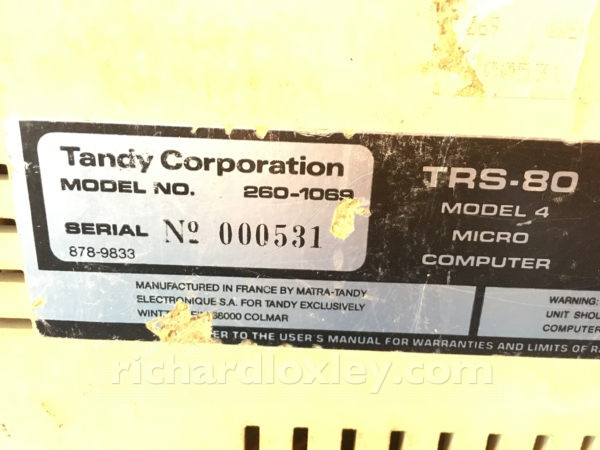 I placed it on one of my sofas for future investigation, where it sat for 12 months!

Today my planned activities were put on hold due to snow, so I decided to have a good look at the TRS-80.  In the last year I’ve learned that the Model 3/4 has a power supply with X2 capacitors that readily fail (I’ve already replaced similar capacitors in my BBC Master and Osborne 1).  So I decided to pre-emptively service the PSU, and clean and service the disk drives to see if I could get it to boot.

First off, let’s open her up.  There are guides elsewhere to opening a TRS-80, but you’ve got to be very careful not to snap the neck off the CRT tube! 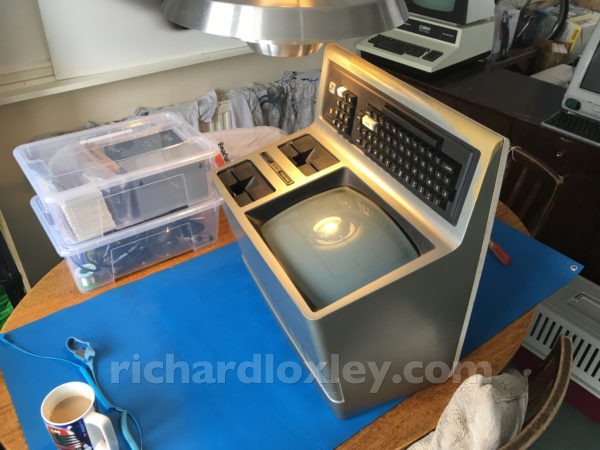 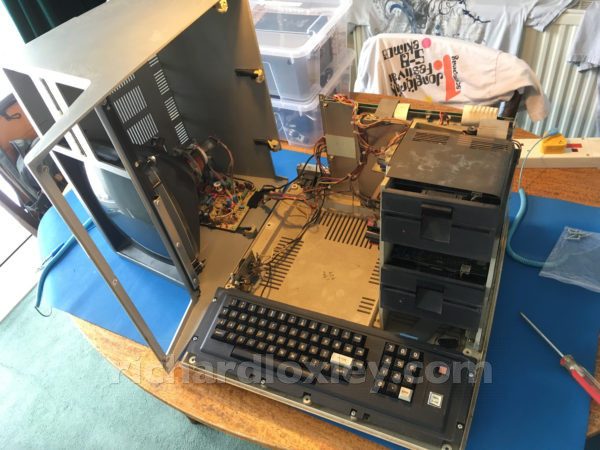 The PSU looks good (I didn’t immediately realise, but this is a Model 4 PSU – the Model 3 had two PSUs, one for the computer and one for the disk drives): 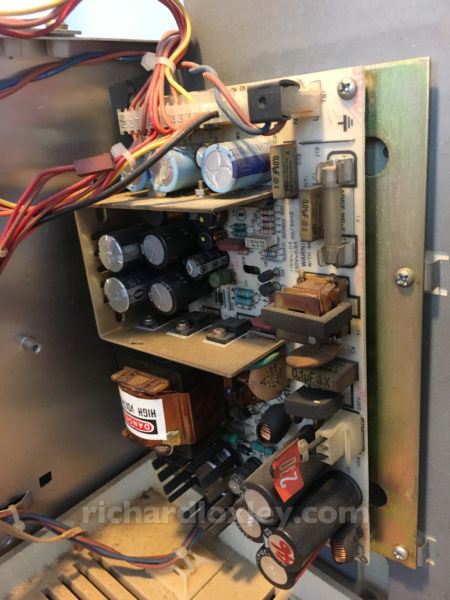 Round the back, the motherboard doesn’t have any shielding (supposedly this should be boxed in): 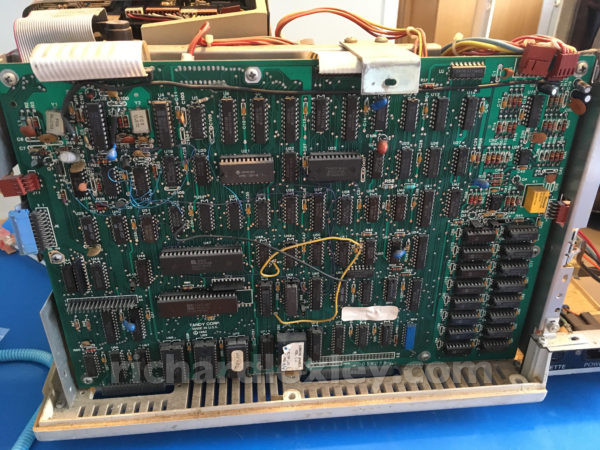 The Z80 is marked Z8400AB1, which apparently is a 4Khz Z80A, which therefore marks this as a Model 4.  The socketed RAM banks in the bottom right are fully populated, so perhaps it has 128KB?  There’s a separate drive controller board in between the motherboard and the disk drives, so this is the original (non-gate array) Model 4.

There’s also an intriguing “Memdisk Adapter” chip fitted, that looks like an after-market mod (the label says “<something> House Ltd”).  Google tells me that the Model 4 natively supports a “memdisk” RAM disk, which is particularly useful on the 128KB model, leaving 64KB directly accessible and a 64KB RAM disk.  So is this native or after-market? 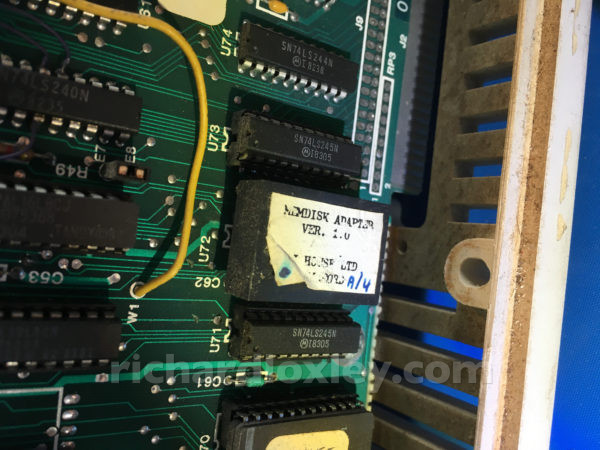 Anyway, I now have a fairly clear idea of what I have (a Model 4, with a Model 3 keyboard, monitor and upper case).

Now to service the PSU: 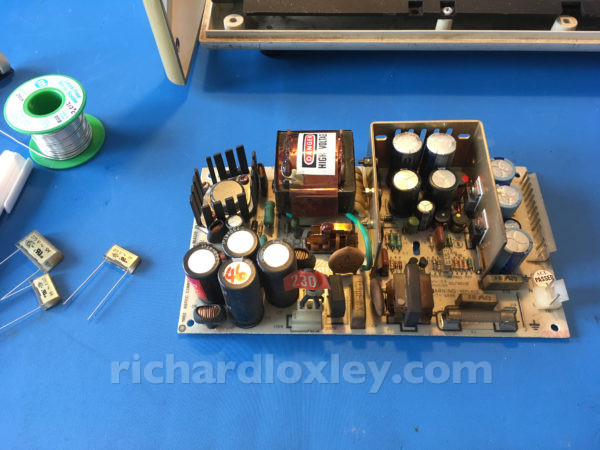 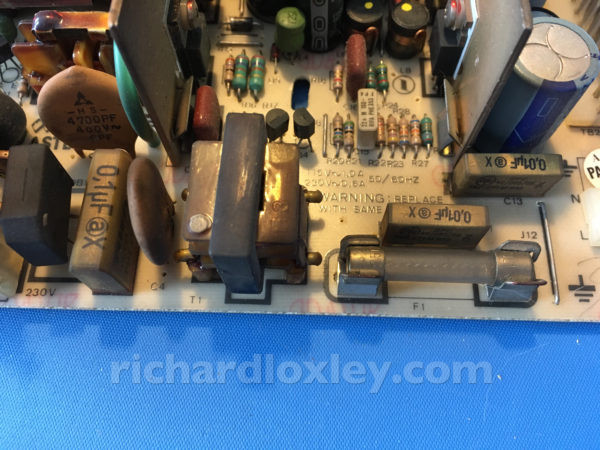 But best to replace them pre-emptively anyway: 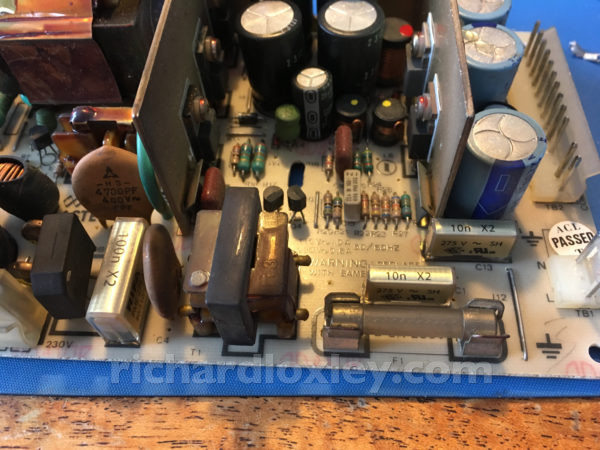 These are the ones I removed.  No external cracks yet, but you can see the stress fractures starting to form, so it was only a matter of time till they blew: 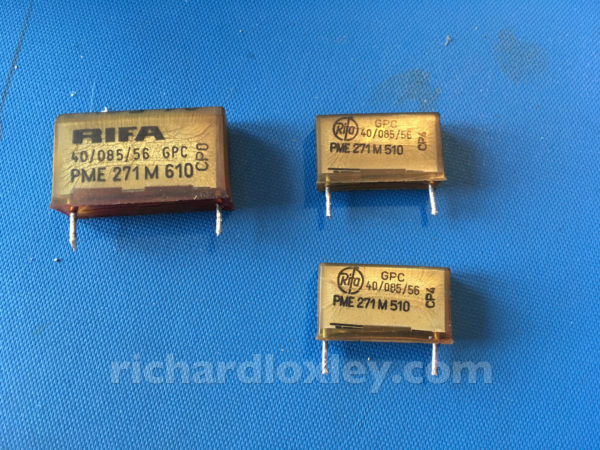 Shall we compare them to the one that came out of my Osborne 1 (on the right here)! 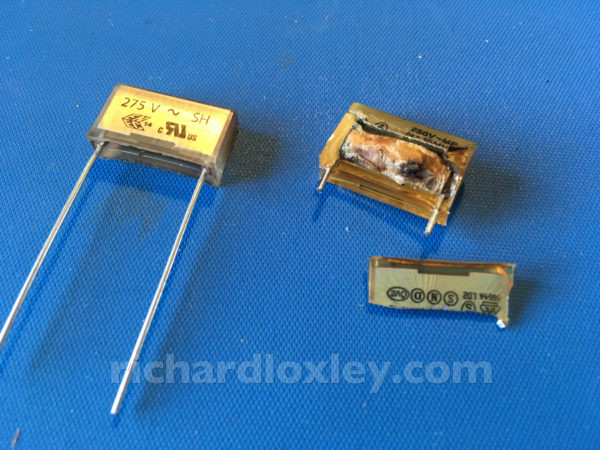 Next to the disk drives.  Annoyingly these drives are assembled using plastic rivets rather than screws: 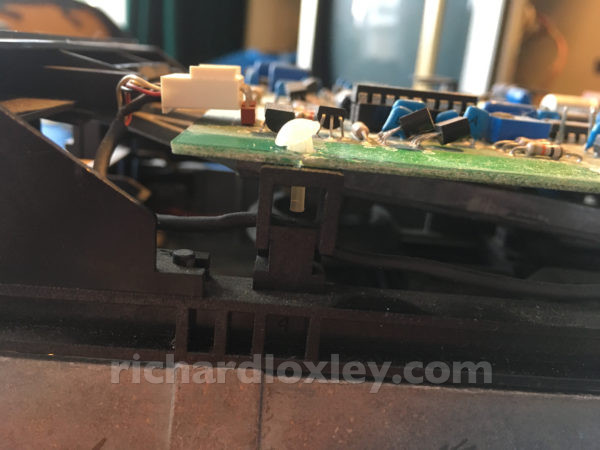 From past experience I know that a probe from my multimeter is the perfect diameter to push out the centre peg: 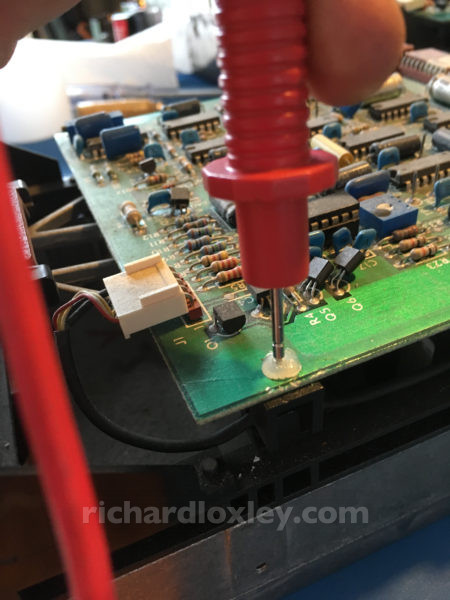 Although the support underneath stops them pushing all the way out, so I then had a pig of a job pulling out the rivet using a screwdriver and pliers.  So when I reinserted the pegs at the end I left them sticking out slightly so that in the future I can just pull them out with pliers: 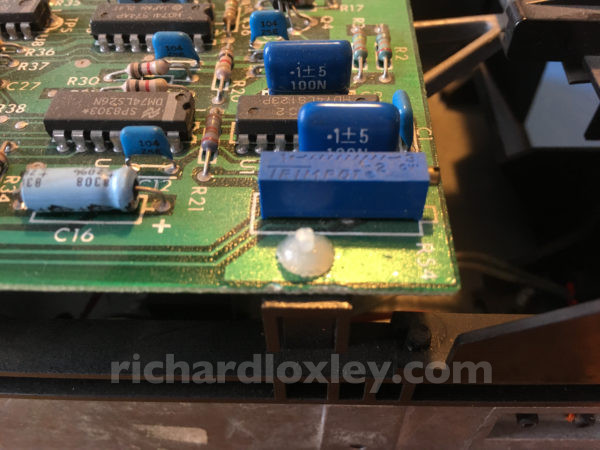 The heads weren’t too dirty (unlike the rest of the insides) but I cleaned them with alcohol anyway.  But the head carriage was almost jammed solid.  Eventually I managed to get it loose, and then cleaned lots of muck off the rails with alcohol.  Still very jerky, so I lubricated the rails with silicone spray (sprayed onto a cotton bud and then wiped on the rails so I didn’t get it everywhere).  Both drives were the same, but the B drive was still a bit rough and squeaky when I’d done the best I could. 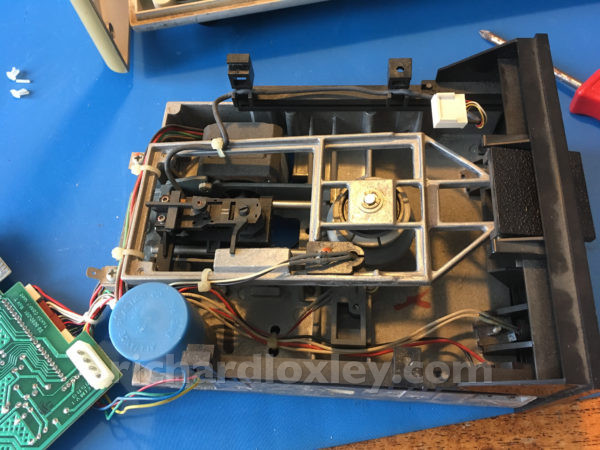 I cleaned the edge connectors with alcohol too: 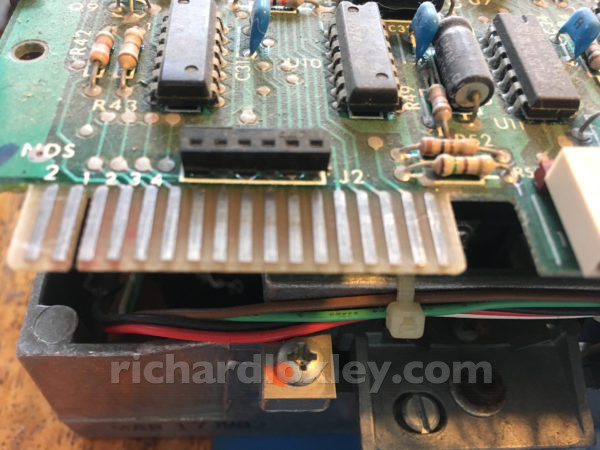 Comparing the two drives.  No apparent difference, no jumpers or resistor packs on either.  (I learned later the TRS-80 uses differently wired cable connectors for drive selection, like the Amstrad.) 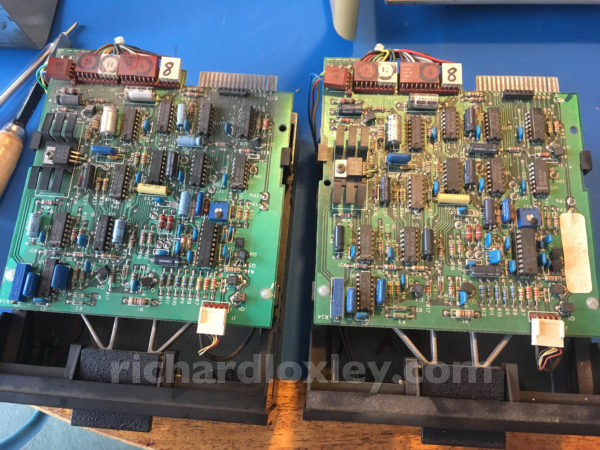 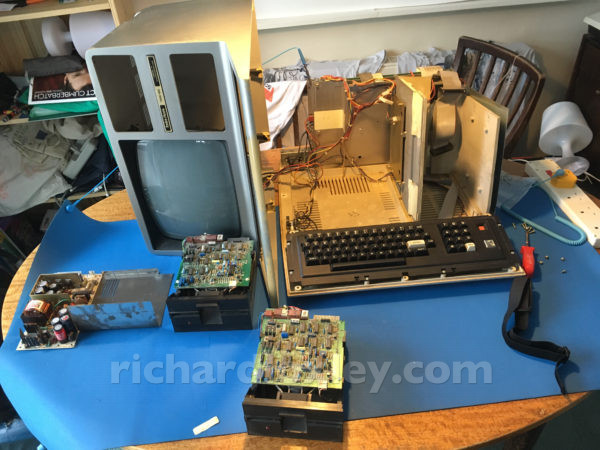 And success!  It boots.  (For my future reference it was the TRS-80 VisiCalc disks that I was able to boot from.) 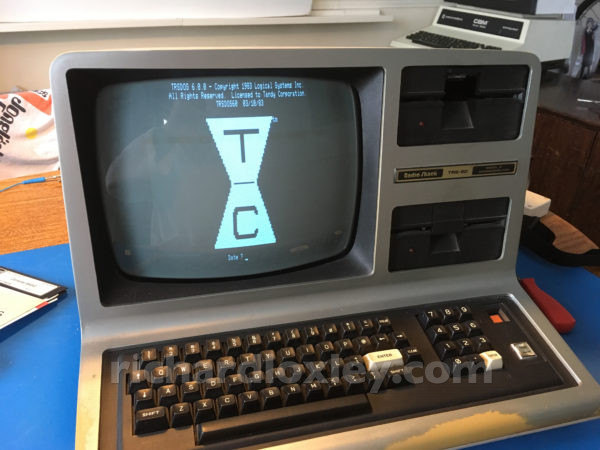 But it can’t read the B drive (showing as Drive :1 here).  That was the one with a noisy carriage, but that might not be the only issue.  Perhaps I should re-visit that sometime, or perhaps I should replace it with an internally-mounted USB drive? 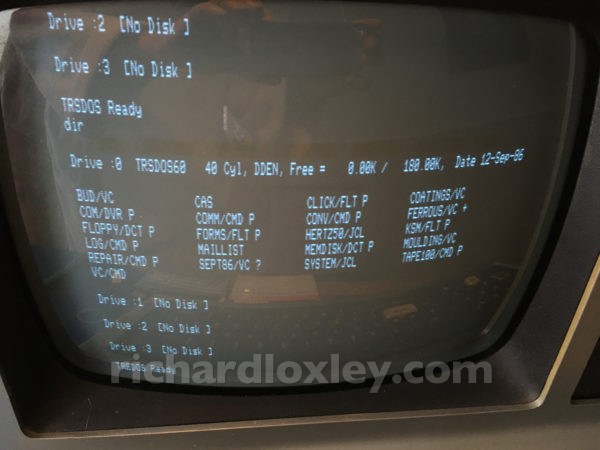 But in my testing I’m now seeing that the text is disappearing off the bottom of the screen.  The vertical size on the monitor needs adjusting.

I managed to find the Model 3 Service Manual.  That tells me I need to adjust R617 on the monitor board. 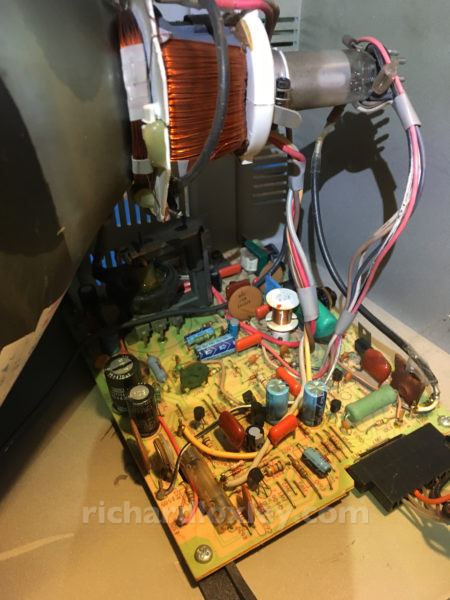 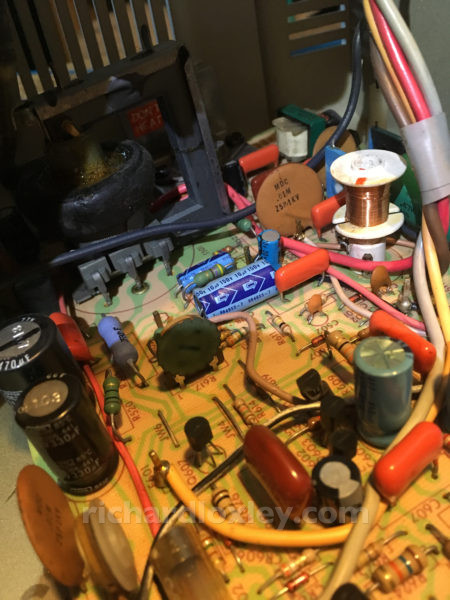 I do this very carefully as I know CRTs can store up lethal voltages even with the power off.  I turn off the computer between each adjustment, and use an insulated electrical screwdriver to turn the pot, and make sure no part of my body came anywhere near any component.

A bit of fiddling and I get an acceptable size. 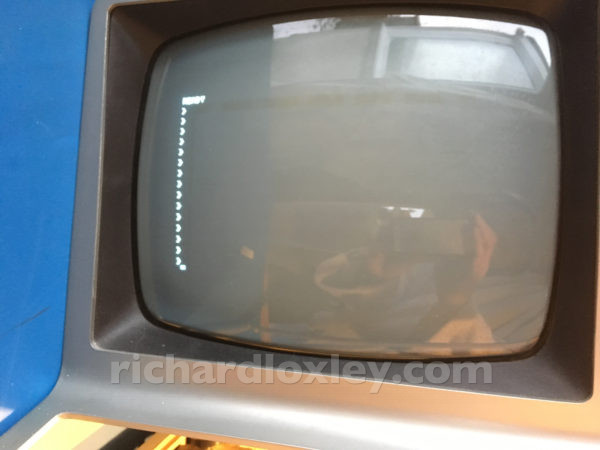 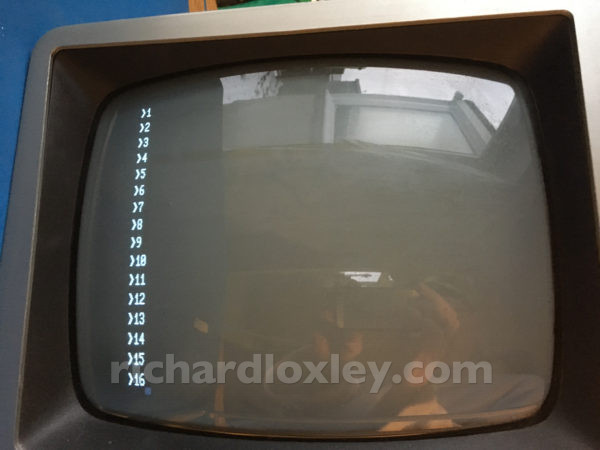 Finally I close up the machine, and test it still works: 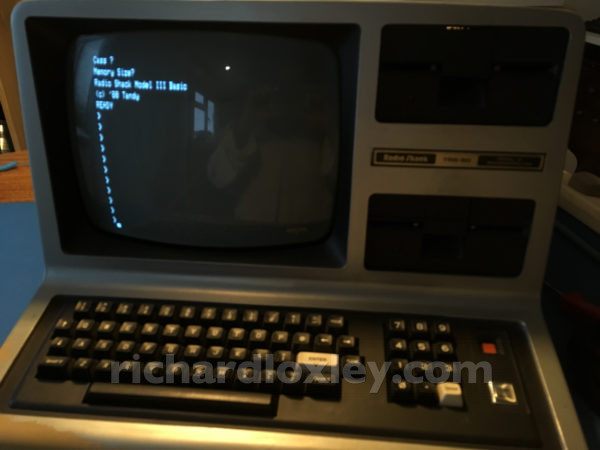 And a quick test, and ROM BASIC is showing the maximum available memory (about 48KB): 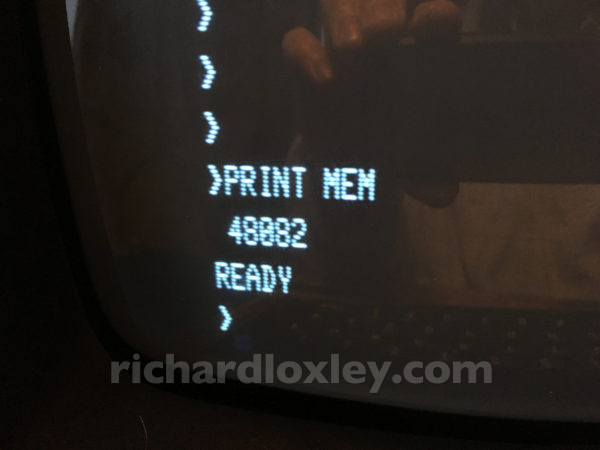 But I won’t be able to confirm that until I boot up in Model 4 mode.  For that I need TRSDOS 6 or LDOS 6, which know how to trigger the Model 4 mode that pages out the Model 3 ROM in bank 0 and replace it with RAM.

(That then gives a full 64KB of RAM starting at address zero, which allows CPM to run on the Model 4 too).

If I mange to boot it into Model 4 mode I may need to do further repairs.  Model 4 mode changes the screen from 64×16 to 80×24, and apparently that uses a different video clock that is adjusted by a variable capacitor that can drift over time.  So it’s likely that will need tweaking for a stable picture in 80 column mode.