Having worked out the “final” connections to the Arduino in my last post, it was time to update my veroboard circuit diagram to reflect it.

Which of course meant a few subtle changes to my pin assignments to minimise the crossing of wires ;-)

Here’s my current revision of the circuit diagram.  It’s nearly 1am now, so I’m going to leave it till daylight to double-check everything is correct! 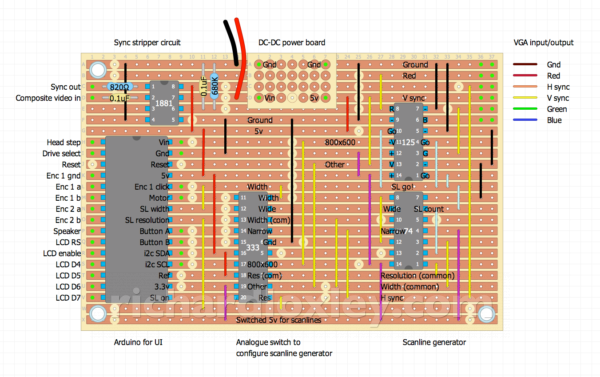 At the suggestion of an experienced friend, I’ve now added some mounting holes in the corners :-)  I could only fit them in easily in three corners, but it’s a small board, so that should be sufficient I think.

The Arduino 5v out is sufficient for everything here – it’s only when I add a 5v supply to the Amstrad 464 disk interface that I’ll need the extra grunt from the power board.

The 30 days of the Retro Challenge are nearly over.  I have two days left (although I really want to leave at least half of the final day to write up what I’ve achieved).

There are a few elements of tidying up that I won’t do till after the Challenge is over.  These are mainly cosmetic stuff with mounting ports on the exterior of the case, etc, and apart from the lack of time, those components are still on their way from China!

Still to do in the main part of the project are:

I might have time to do all of those, but it will be tight!

The case gives the biggest visual impact, and much of the project is currently working on breadboards that can be hidden in the case.

But some of the components (e.g. the scanline generator) will only work when I solder up the circuits. So if I prioritise the circuit I could get everything functionally working, but not so prettily. Although the circuit itself should be pretty (in geek circles at least).

So functionality or aesthetics?

But should that be the case in something so geeky?

I think in the morning I’ll check the circuit, and then start assembling the UI components.  If they take too long I’ll just get them sufficiently in the case to give the correct impression.

Then I’ll try to start soldering the board before the end of the day, leaving the first half of Sunday to complete it.  I’ll try to do it in sections, so if I don’t finish I can still run a demo of the remaining components off a breadboard!