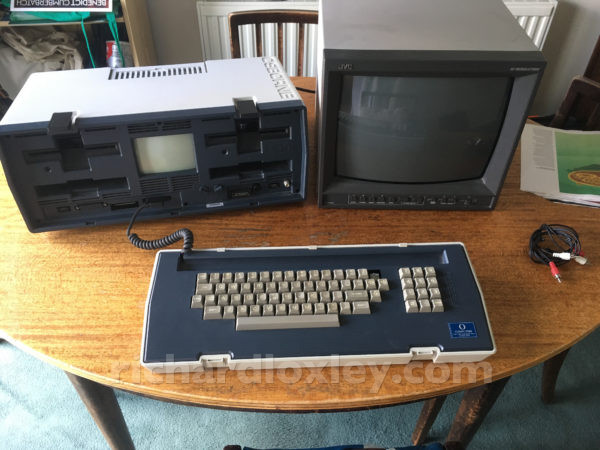 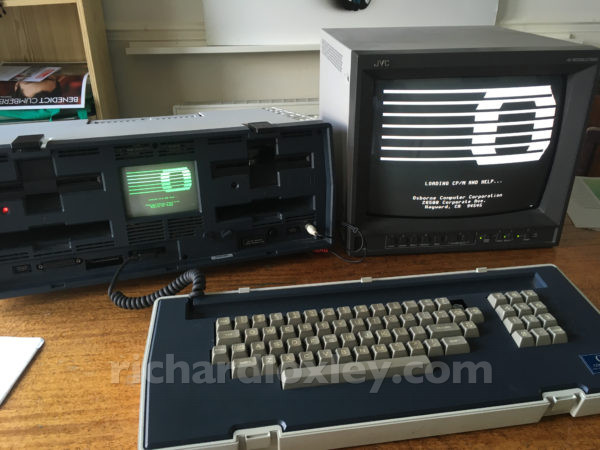 The 52 column output, while great for the 5″ monitor, is a little chunky on the 14″ external monitor: 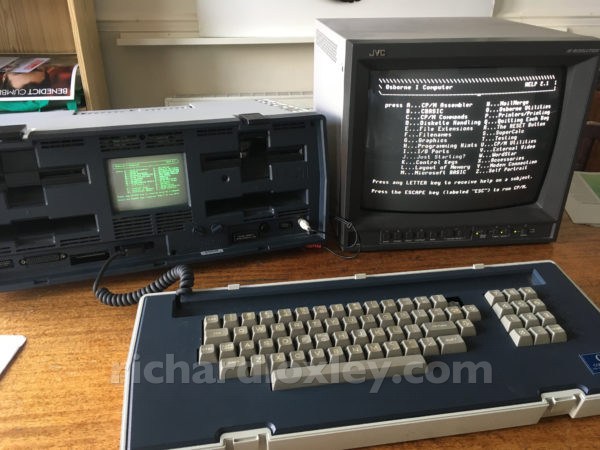 It’s still very usable, and clear, but since most software displays more columns, it’s a pain to use the Osborne’s virtual window system (where you move a window around the virtual screen with Control-arrow key combinations).

On the built-in monitor: 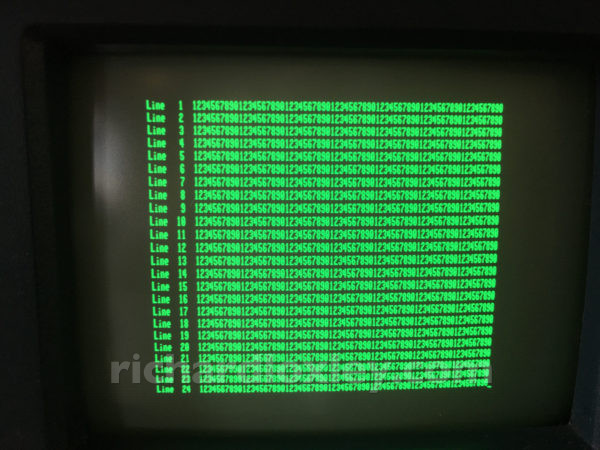 Now on the external monitor.  Oops, the top and bottom lines are lost in the overscan region! 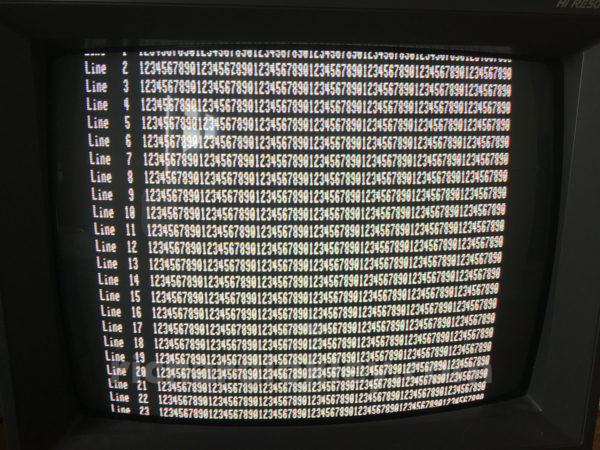 Thankfully the JVC is a professional studio monitor, so I can turn on underscan.  I’ve also turned up the brightness on this picture to visualise the output with respect to the video signal.  It puts pixels right to the top and bottom extremes of the video signal! 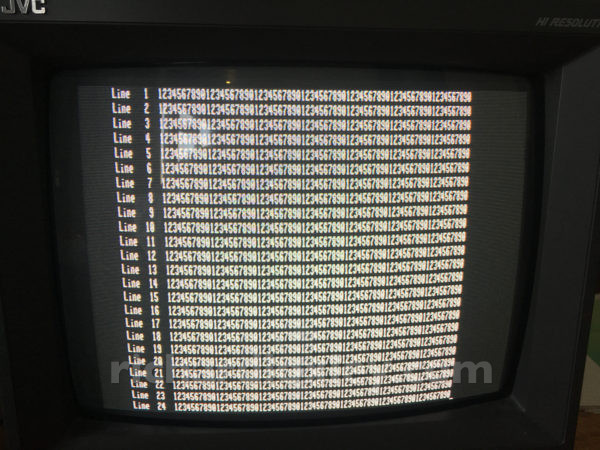 I guess since they designed the video output for the built-in monitor, with an optional Osborne branded 12″ external monitor, they were in full control of the video display, so could set up their monitors with no overscan.

Let’s have a look at the character set: 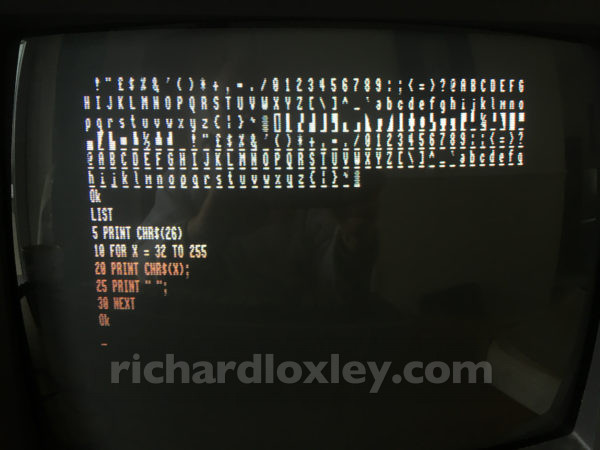 Zooming into those pictures, I see the characters are made up of 10 pixels in height, so 24 lines would give 240 pixels total.  As you can see in the pictures there are ‘scanlines’, indicating that only half of the interlaced video signal is used (as common with all computers of the era), so that means they are using the full 480 horizontal lines of an American 480i signal. (I would write NTSC but technically it’s a monochrome signal).

It hadn’t occurred to me it would be 240p rather than 288p (half of 576i) used in PAL territories like the UK.  All my other computers are 288p as they are UK models, but the Osborne was made in the US, and since they controlled the monitors, it didn’t matter what the video signal was.

Sadly the status display on my JVC monitor doesn’t indicate the frequency of the incoming signal. But given the resolution I think it’s highly likely it’s 60Hz rather than the 50Hz common in the UK.

I may be lucky that my studio monitor can handle any TV standard.  I wonder if other UK computer monitors from the 1980s would have worked with the Osborne Screen-Pac video output, or whether you’d have had to buy the official Osborne monitor?

Next to try our luck with the 104 column mode (with the BASIC program modified to put out 100 characters per line): 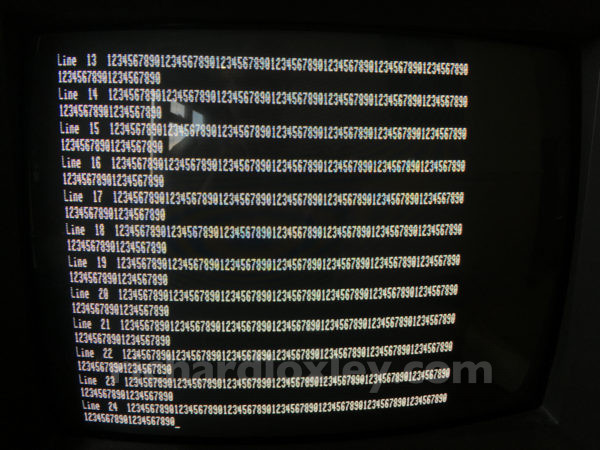 Ah, that’s not so good.  How does it look on the built-in monitor? 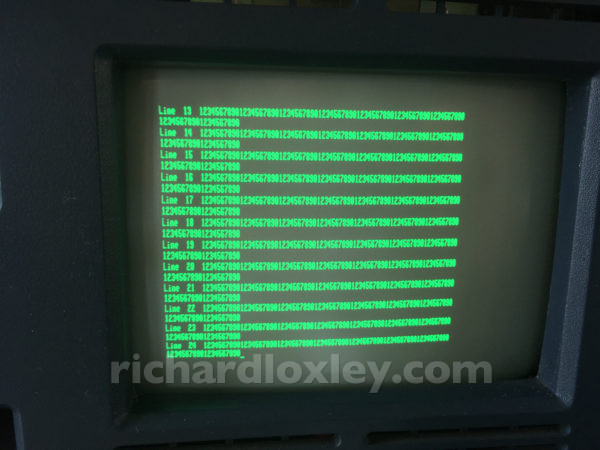 Just the same.  I guess that Microsoft BASIC is designed around an 80 column screen, so automatically wraps lines at 80 columns.

The text looks a similar size to the 80 column text, it just uses more of the screen width (the 80 column mode had quite a bit of space to either side).  So I’m guessing the video hardware just works at twice the physical resolution of the 52 column mode, and they provide an 80 column ‘centre cut out’ mode in software for compatibility with 80 column software.

Supposedly the SuperCalc spreadsheet bundled with the Osborne could make use of the 104 column mode, and I imagine the extra screen real estate would be very useful for spreadsheet work.

I haven’t checked close-up with the 52 column mode, but I think the characters are made from the same number of pixels (they are just twice as wide).  So I think the same character generation circuitry is used by both, and the different modes are just achieved by manipulating the analogue video signal timing.