So far I’ve been unable to boot up the first Osborne 1, so I bought a second one on eBay.  This one comes with boot disks and lots of other extras.

I picked it up last week and have just got it home: 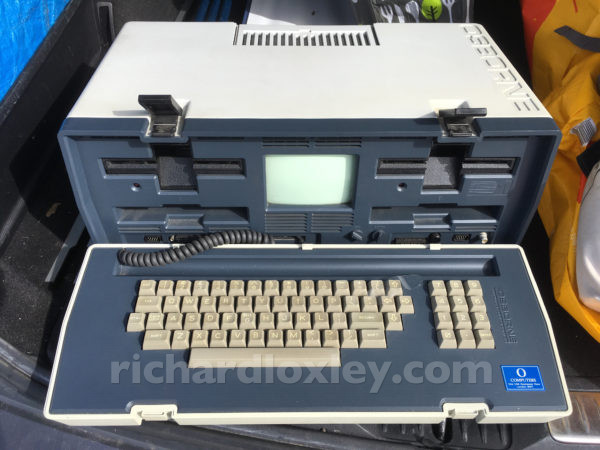 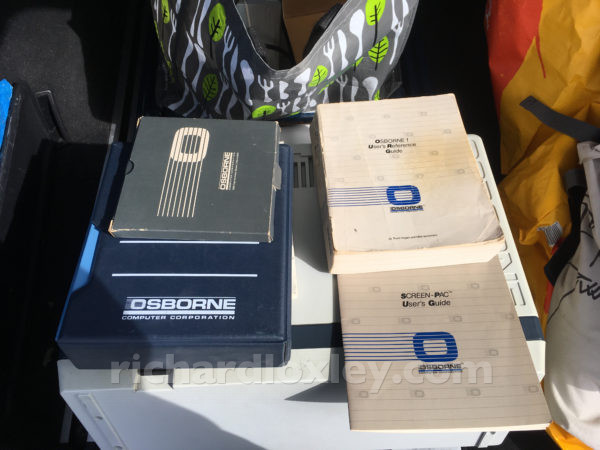 It had belonged to the seller’s father I believe, and seems very well cared for.  The seller seemed happy that it was going to a collector who would appreciated it!

First off, let’s see what we’ve got in the package… 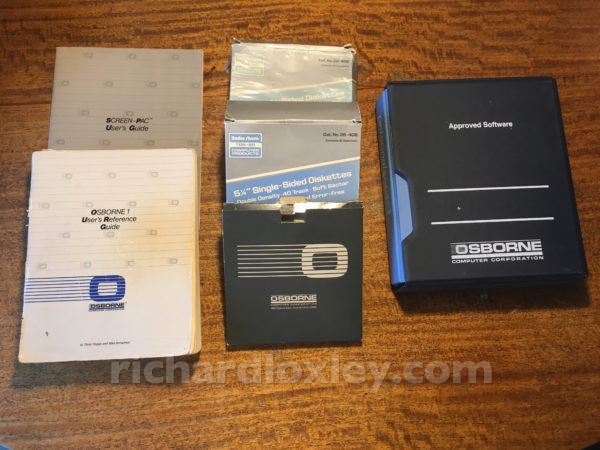 We have manuals for the Osborne itself (a massive tome), and the Screen-Pac add-on graphics card.

The Screen-Pac seems to be installed in the computer (evidenced by a composite-video port on the front).  This is a higher-resolution graphics card that can drive the screen in 80 column or 104 column mode (in addition to the 52 column mode of the built-in graphics).

This is useful as I believe a lot of CPM software requires more than 52 columns to run (the Osborne gets around this by having a virtual screen that is 128 columns wide, with the built-in screen showing a 52 column window which can be moved around using the arrow keys).  But displaying the whole lot without needing the virtual window should be much better.

The Screen-Pac also includes a composite video output for driving an external monitor.

In the back of the Screen-Pac manual is an unused voucher for a video adapter.  I wonder if it’s still valid ;-) 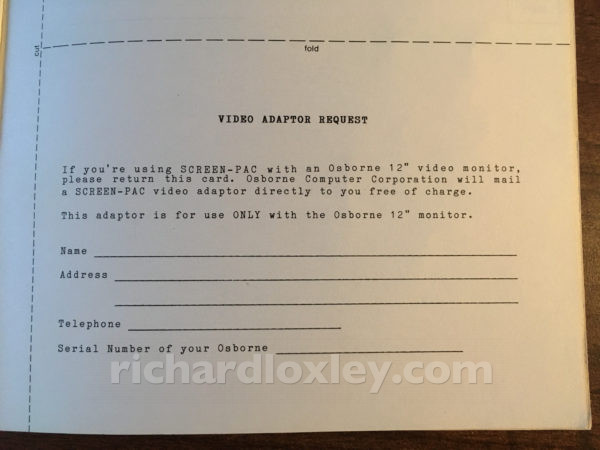 Next we have the original packet of boot disks: 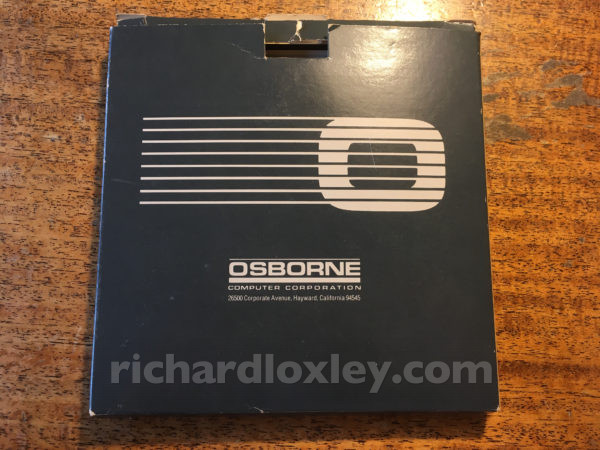 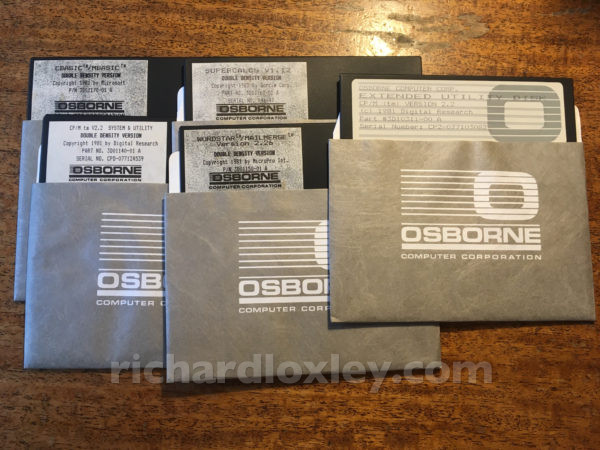 The disks look immaculate, as if they’ve hardly been used.  Which is probably true, since another box contains copies of the boot disks, and backups: 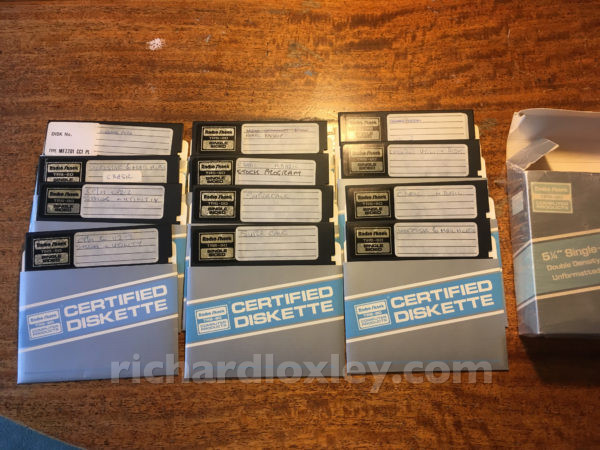 And another box contains what looks like data disks: 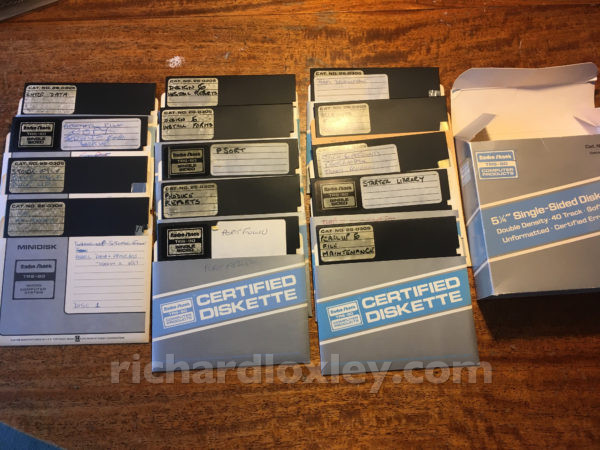 I shall have a look at the contents of those disks, but if there’s any personal or business-confidential data on them I won’t pry further.  I’ll just file them away for the historical record.

Finally we have a copy of “Personal Pearl”, which appears to be a database program: 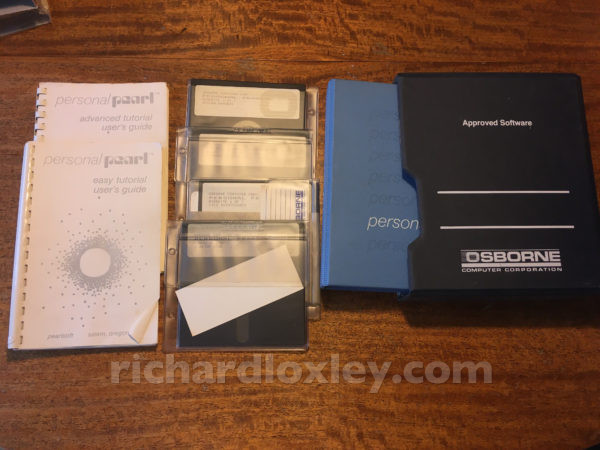 Now let’s compare this computer with the one I previously bought.

The one on the left is the one I already had.  On the right is the newly-acquired one.  The second one is much less faded and in better overall condition: 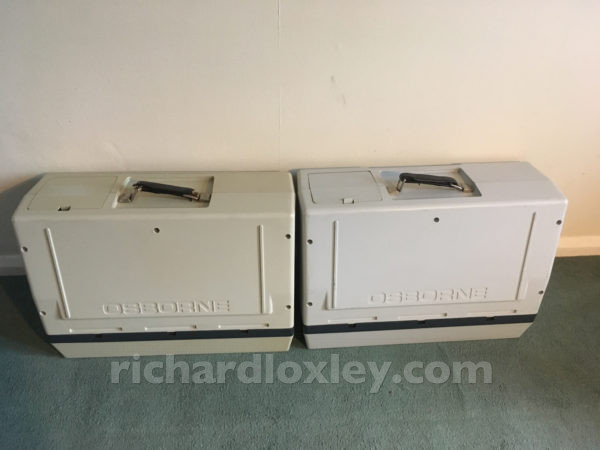 Looking at the other side, more evidence of UV yellowing of the first one: 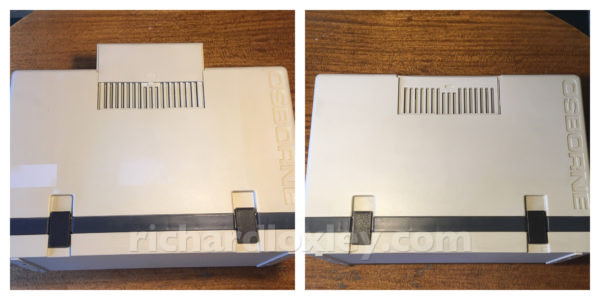 However the second one is missing the cover from the ventilation holes.  I guess it saved having to remember to open the cover before turning the machine on: 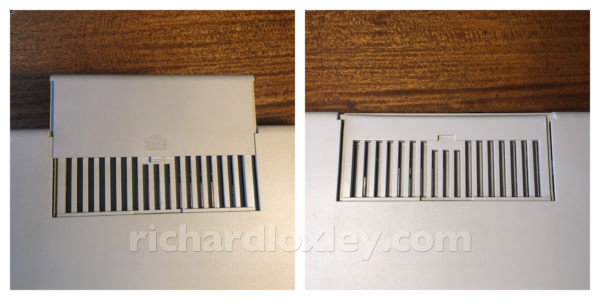 The handle on the second one is in better condition:

The second one also still has the catch on the PSU cover: 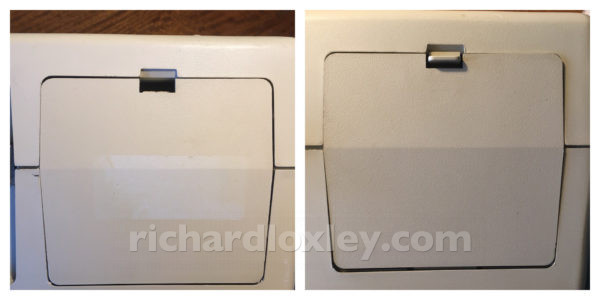 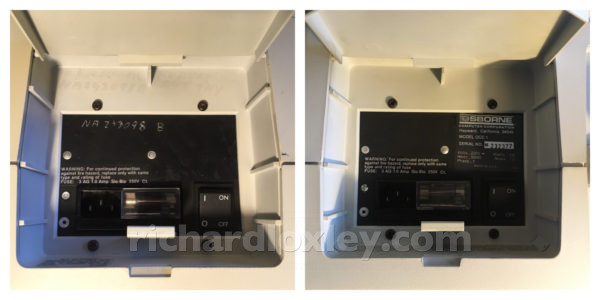 Around the front, they have slightly different knobs on the video controls: 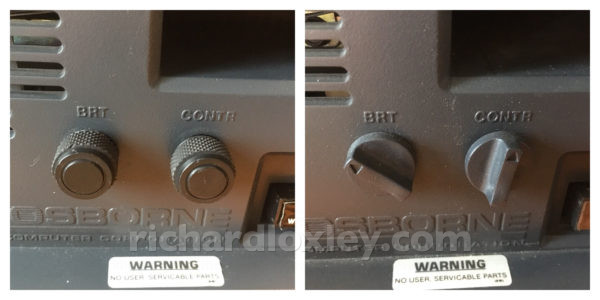 And you can see the composite video out (RCA/phono) which suggests the Screen-Pac board is fitted: 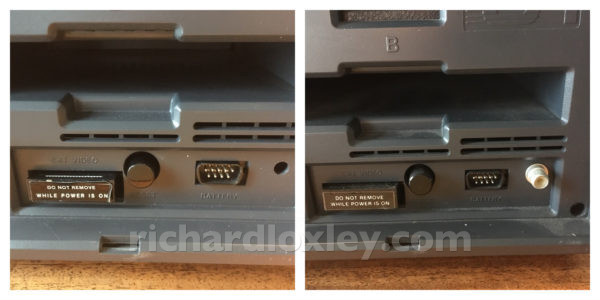 The second machine has one broken key (the up arrow) which I may be able to fix with glue.  Also a sticker from “O Computers” which I presume is the company that supplied it. 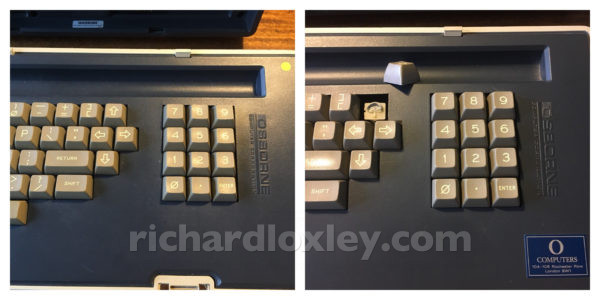 And the keyboard cable is slightly different: it is entirely coiled, which makes it shorter.  That probably makes it easier to pack away without getting caught in the hinges, but I wonder if it limits the distance from the screen? 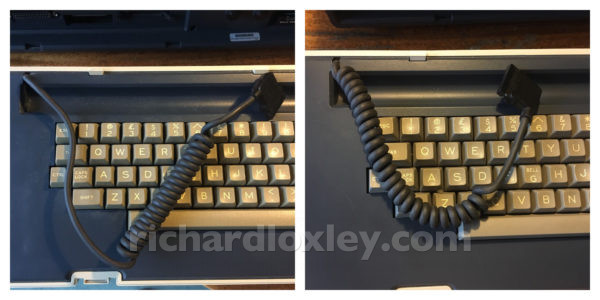 So the next step is to power on the new machine, try to boot up from the copies of the boot disks, and make further copies of the disks for safety.

But I’m not going to do that until I’ve re-capped the PSU, and checked/cleaned the disk drives.  Which is a job for another day :-)