In the previous post I failed to get my Osborne 1 to boot from a USB floppy emulator.

Now to do some debugging!

I rearranged my working area for the day ahead. First I partially reassembled the computer to hide all the mains voltage live wires. Then I made space to work on all the floppy cables with my test gear whilst comfortably seated with decent lighting 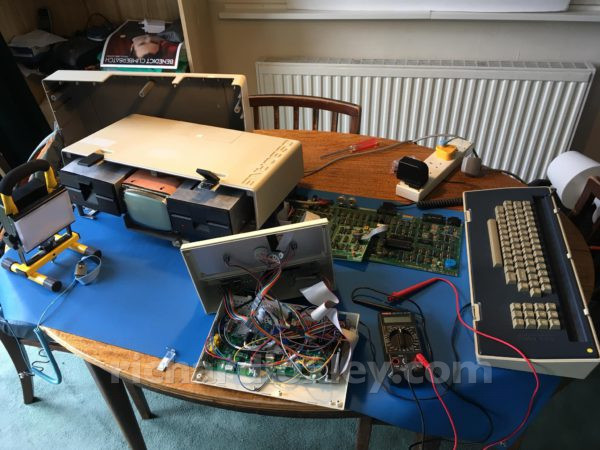 I made a spreadsheet showing all the pin assignments for the different floppy standards. And included the layout of my Osborne cable compared to the one known working cable I’ve seen online: 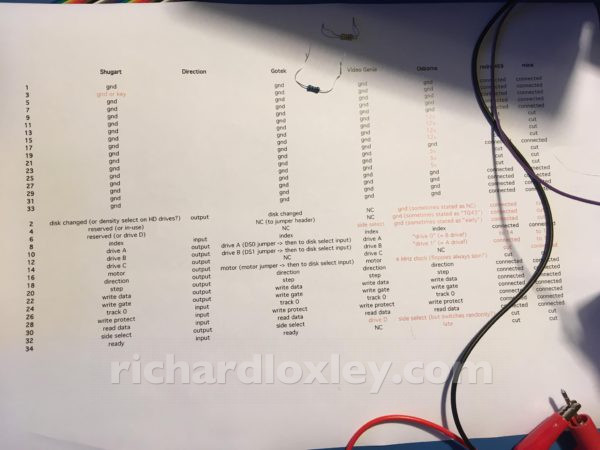 I test the conductivity of my cable to ensure it matches my wiring plan. It does: 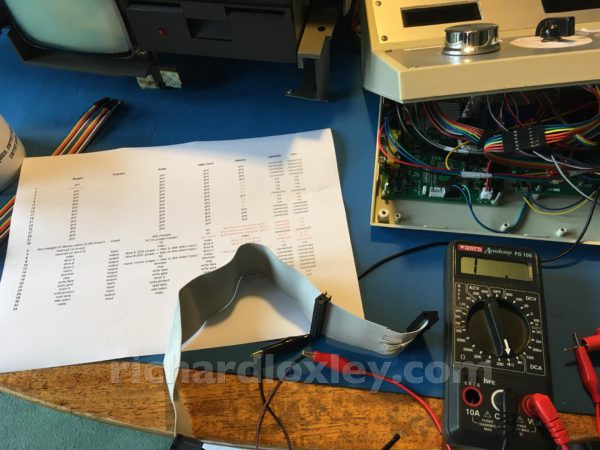 Next I investigate the pull-up resistors, by consulting the original schematics of the Osborne computer, the Osborne drives, and my Gotek USB drive.

The Osborne drive has a terminating resistor pack of 150 ohms on all the signal lines at the far end. It seems my USB drive has 1K pull-up resistors on most lines, but not the drive select lines. Maybe that’s why the drive select doesn’t work?

(Reading about terminating resistors, it seems 150 ohms means you can have floppy cables of several metres, but 1K – 3K is fine for cables up to about a metre and wastes less power in the resistors.)

So I add some 1K pull-up resistors to the drive select lines (using the spare connector in the middle of the short cable to get access to the pins). No difference. I try 150 ohms. No difference. 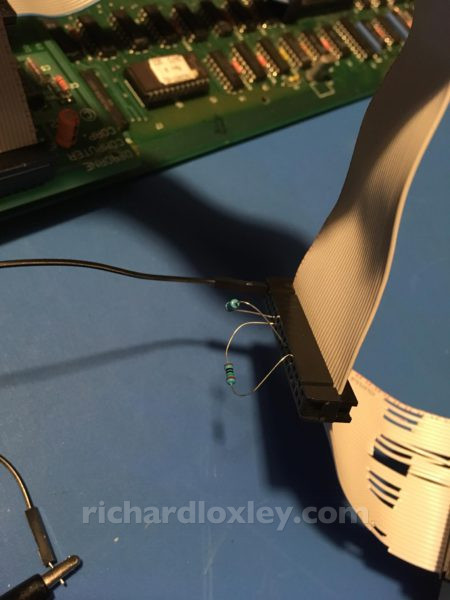 Next I break out a breadboard to pull out all the signal lines for further testing with a multimeter: 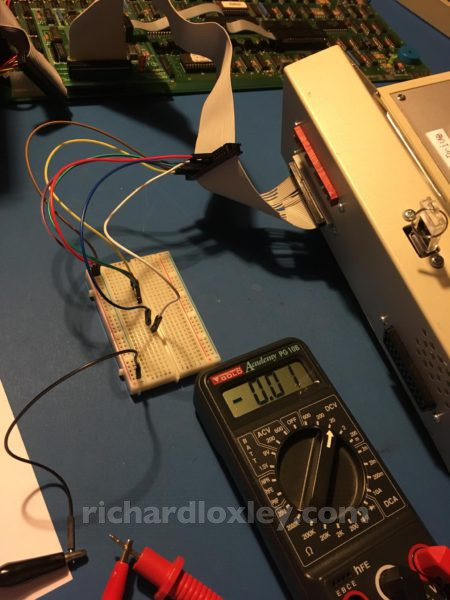 An oscilloscope would be better for looking at changing signals (if only I had one), but I can mostly see if a signal is static or changing. Most lines look ok.

The read line doesn’t seem to change much. It is fluctuating slightly, but that might be random noise, or it might be mainly zeros it’s reading. Given the drive steps ok, but the computer just gives boot errors, it could be that the read signal isn’t getting through for whatever reason?

The other suspicious signal is from the drive select lines. They should be pulled up to 5v, and then the computer should pull them to ground (0v) when it wants to select that drive. The Osborne only seems to pull it back down to about 2.5v. That’ll be why the Gotek doesn’t recognise the drive select signal. I can fake the signal by pulling it to ground at the Gotek end (as I have been doing) but is this a sign of something further that’s wrong?

The only other known working cable (from redrum69) left 3 wires connected that I’ve cut. They should be cut, according to my research (and his!), but here I’m reinserting them (via the second port on my RetroMatic 2000) to rule that out. No difference. 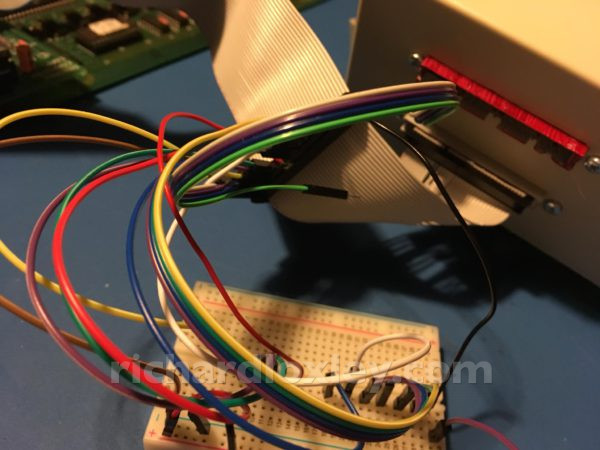 This is all I get: 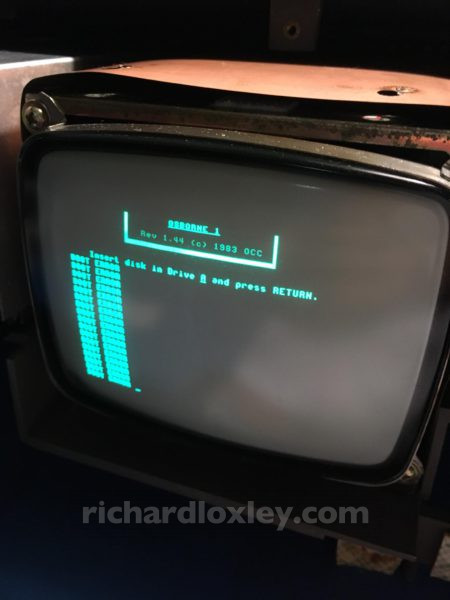 I’ve tried multiple disk images from multiple sources. The only constant is the software I use to convert the image for my USB emulator.

That software also allows you to inspect the bytes of the resulting image, and it definitely contains CPM stuff (I can see lots of text in there):

Next I wonder if the resistor pack at the end of the drive cable is relevant. Or something else in the physical drive. So I add a connector to my test cable so I can plug in a genuine Osborne drive (with the resistor terminator pack) as well.

I didn’t want to waste my only remaining connector on this test cable (I’m saving it for my final cable), so I hacked in a broken one. It seems to be holding up well! 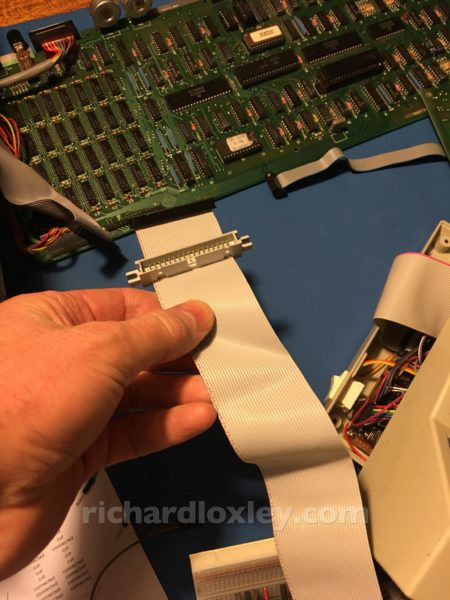 Testing with the built-in drive too. No difference: 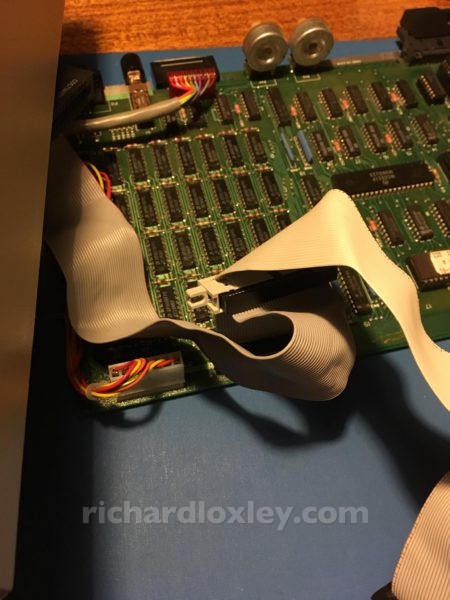 I’m coming to the conclusion that there are two likely possibilities.

Either there’s something wrong with the way I’m burning my images (but I can’t see what), or the disk controller on the Osborne is broken.

The fact that it doesn’t ground the drive select pins properly makes me wonder about the disk controller.

Looking at the disk controller chip, it has weird solder marks at the two pins either end. The same pattern is repeated on the other side too. But it also looks like it’s in a socket within another socket? Is it because the chip has a different pinout to the underlying board and they’re using a socket to change the pins? Who knows. 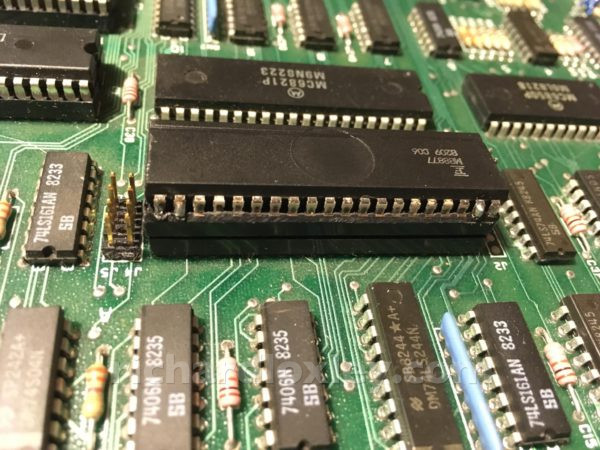 So this is where I’m at. I’m at loss to do anything further without an oscilloscope and a lot of spare parts to swap in and out.

So for now it’s time to reassemble it and put it away. It still starts up and will try to boot from either drive, so I haven’t broken anything at least! 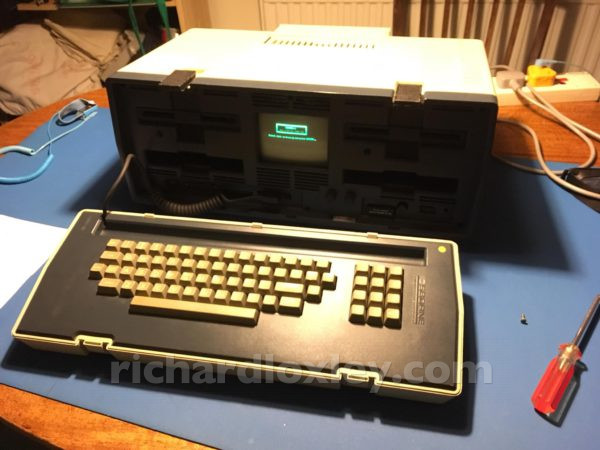 Hmm, isn’t it always the way? Where did you come from? Into the drawer of miscellaneous screws it goes! 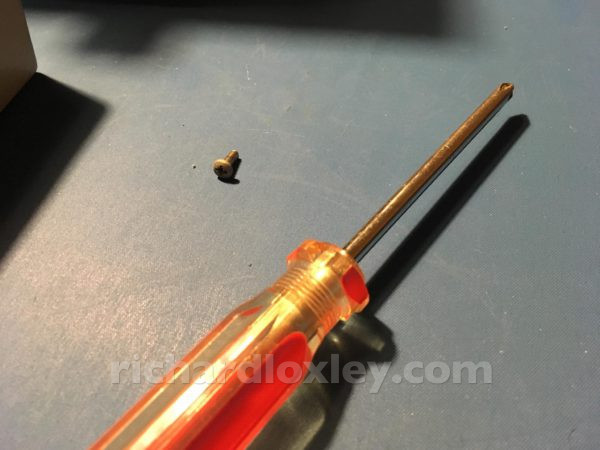 And before my test resistors go into the drawer, let’s replace those annoying coloured stripes with something more usable! 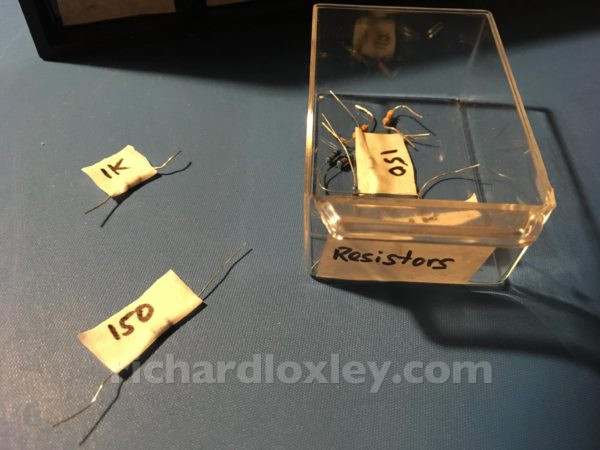 Do what do you do when faced with a computer you can’t fix? Buy another one of course! 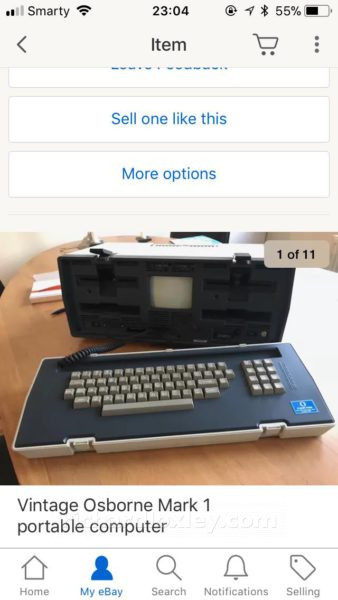 This one was quite annoying. It was listed a week after I got mine, but it’s half the price I paid, comes with the original boot disks (and lots more software too), has been tested booted up from said disks, and seems to have the rare 80 column display card fitted too! If I hadn’t already got one, I’d have snapped it up.

But now I have snapped it up, as I’m then guaranteed a working computer for only 50% more than I’ve already paid. And there’s a chance I’ll be able to copy the disks and get the first Osborne working, at which point I can pass it on to another collector.

If the first Osborne doesn’t boot up with known good disks, then I can eliminate possibilities by having a good one to compare it to. And if all else fails I’ll have a kit of spare parts to keep the other one working.

Only two issues with the second Osborne: one of the keys has fallen off the keyboard (not a problem as I have another keyboard). And it’s collection only from quite a long way away

But I have a friend who lives near the seller, so I got her to take delivery of the new Osborne ?  I’ll pick it up from her in a few days time!