Now to the final part of my personal ‘retro challenge’.  Which was:

As an aside, I’d already come across a BASIC version of Colossal Cave on one of the pre-made disk images I’d downloaded from the internet.

But I really wanted to get the Hitchhiker’s game running.

I didn’t find an Osborne-specific version of HHGG, but I did find CPM versions at foxhollow.ca and z80.eu. The CPM HHGG is basically two files, a binary and a data file:

I loaded them onto an Osborne disk image and gave it a go:

Well, it works, sort of.  There are loads of random characters, presumably control codes to manipulate screen layout that are designed for a different terminal type than the Osborne.

It seems all Infocom adventures use the same interpreter, with a separate data file for each game.

The only difference is the name of the data file is embedded in the binary, so you have to patch the binary to point to your game file.

I found another generic CPM version of Zork 1 at retroarchive.org, so tried the interpreter from that.

First I had to patch the filename in the binary.  I used Hex Fiend on macOS: 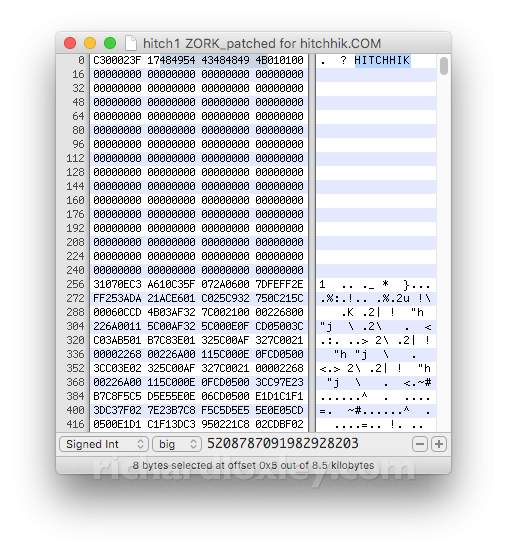 That worked much better (no random characters) but the score/status line no longer appears, and also the text wraps at 63 columns, so didn’t fit into the Osborne’s 52 columns.  I could force the Osborne to wrap at 52 columns, but that leaves loads of partial lines, which is very ugly.

Next I tried to patch the binary further.

I had a bit of confusion from the instructions in the above blog post, until I realised all the hex addresses mentioned were out by &0100 from my file.  (I later found out that CPM .COM files are loaded into memory at &0100, so those are actual memory addresses, not offsets in the file.)

Here are the locations that can be patched:

The blog post suggested some character strings for the Osborne, which I tried.  However some (such as characters for reverse video) don’t actually work on the Osborne.

I looked up the Osborne manual for which screen control codes it supports.  For convenience I’ve reproduced the list here:

Apparently it’s based on the TeleVideo 920C standard, although codes other than those listed above don’t seem to work.

The x/y coordinate codes initially seem a bit weird, requiring a 32 offset from the actual position.  But it makes sense, as starting counting from 32 means the x and y encodings are always visible ASCII characters rather than control codes themselves!

Using this code guide, I developed my own Infocom patches for the Osborne: 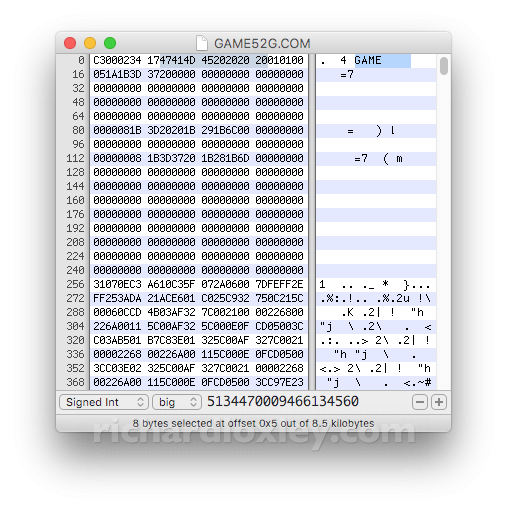 This gives a rather pleasing version with a dim underlined status line at the top of the screen divided from the main text: 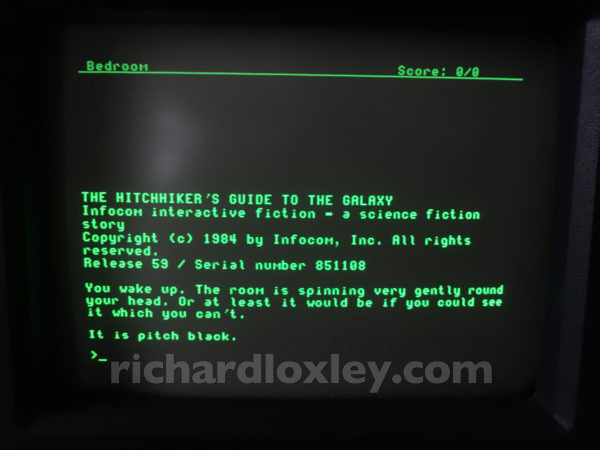 I also patched in a game file name of simply “GAME”, so I could use it for multiple Infocom games without further patching (by renaming HITCHHIK.DAT etc to GAME.DAT).

Finally I created 6 different versions, for the 3 different Osborne screen widths (52, 80, 104), and either generic CPM character encoding or with the Osborne control code characters.  The different widths would allow me to use the wider version on the external monitor.

The CPM boot disk I have tries to load a file AUTOST.COM after it boots, so it’s possible to just rename one of those files to AUTOST.COM to have it start automatically.

Here’s a zip file with these files.

I’ve also made a zip file with all the games as bootable HFE disk images for use with a Gotek/FlashFloppy drive emulator.  There are Osborne system disk images in the zip file too, to get you started.

Finally I achieved my ultimate goal!

As a final task, I wanted to add a menu to select between the different screen widths (and change the Osborne screen resolution accordingly).  So far the only way I’d found to change the resolution is to use the SETUP utility to change which mode a specific disk boots up in.

The manual for the Screen-Pac graphics card says you can change the screen size in MBASIC: 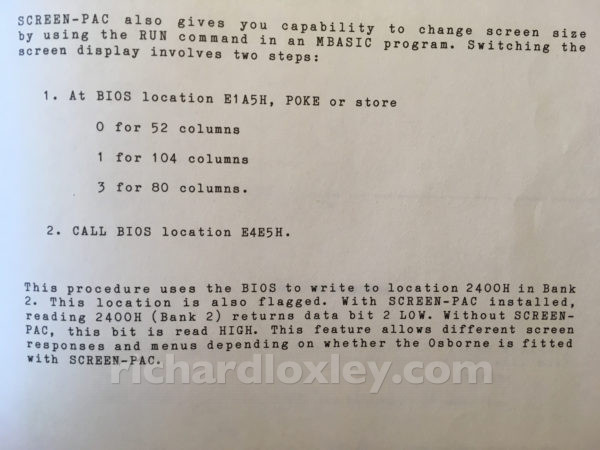 I’d tried that before, but couldn’t get it to work then.  I tried again, and double-checked my BASIC code was correct: 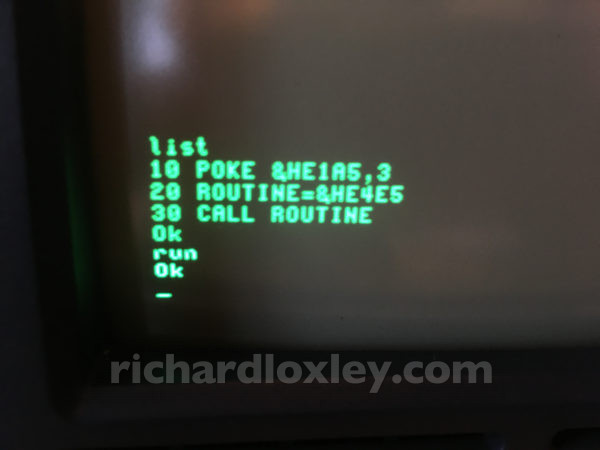 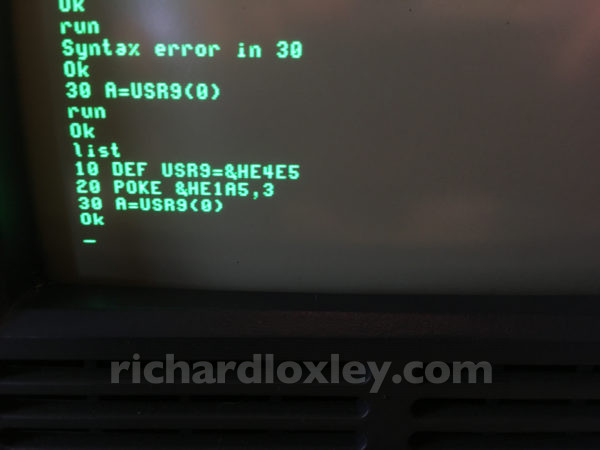 Neither had any effect.

I decided to check just what code was at location &E4E5 by disassembling it: 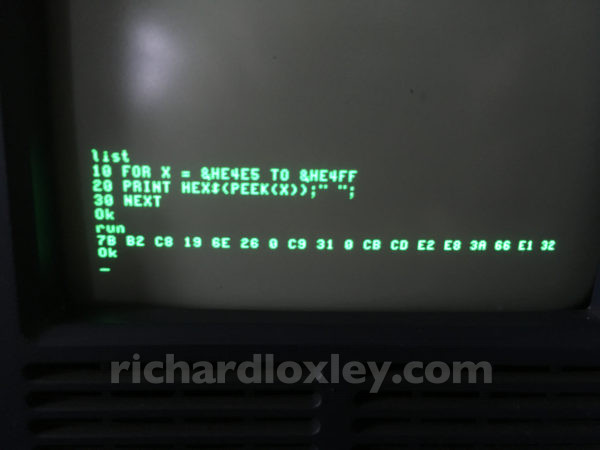 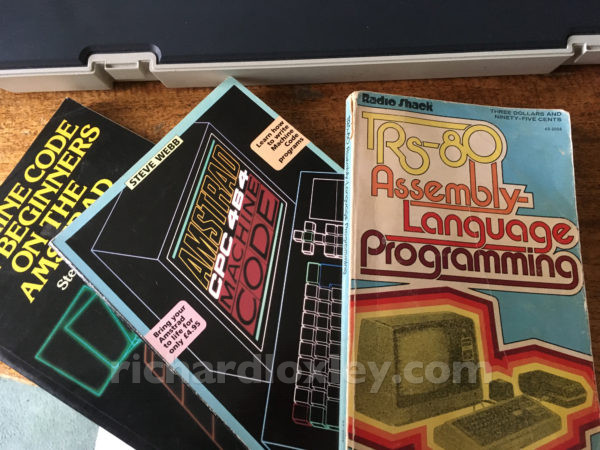 I disassembled the code the old-fashioned way: 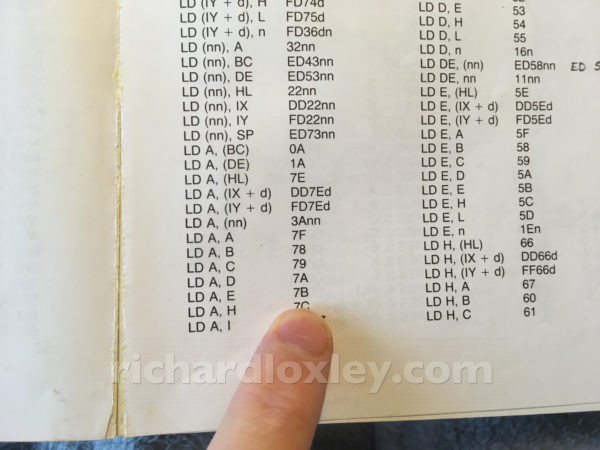 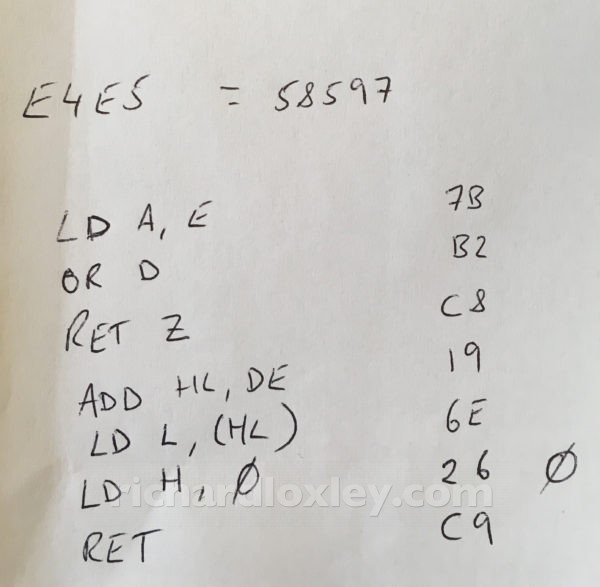 I always used to assemble code this way (and using these very books).  Disassembling was harder though as the opcodes in the book are in alphabetical order not numerical order!

The manual states that this routine should look in &E1A5 and use the value to change the screen resolution.

But it’s clearly doing nothing of the sort. It seems to be checking DE is non-zero, then adding DE to HL, using the result as an address and dereferencing the single byte at that address, then returning that value in HL.

So nothing to do with the screen hardware.

Perhaps the ROM is a different revision. Perhaps the manual has a misprint. Perhaps MBASIC doesn’t page in the correct memory bank to access the ROM. (But the manual does give this as a method for MBASIC to change the screen resolution.)

But I’m not going to let it detract from the main event.

HITCHHIKER’S ON MY OSBORNE FOR THE WIN :-)